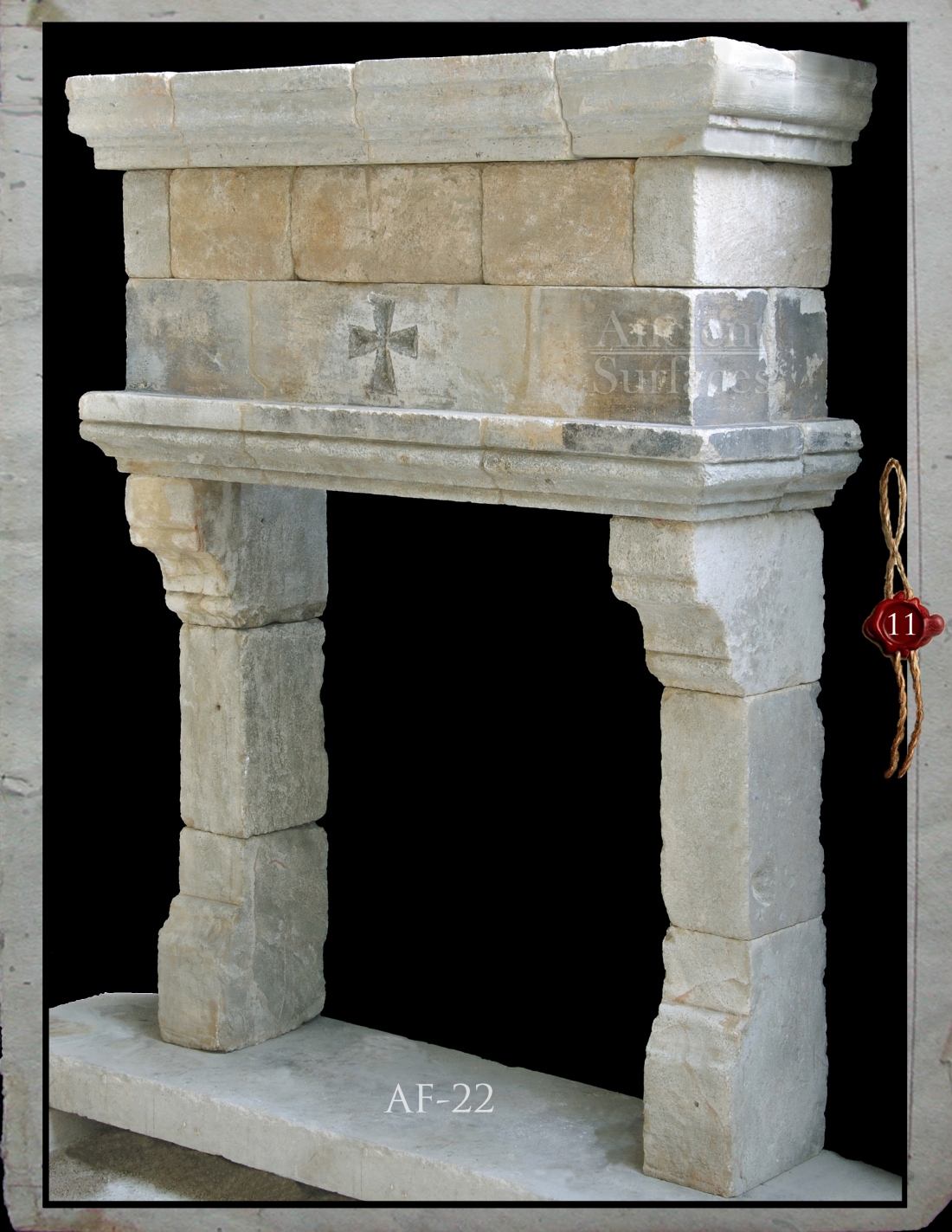 This Online catalog selection featuring some of our captivating antique limestone fireplaces were taken from our own printed fireplace catalog from 2011 to 2016. 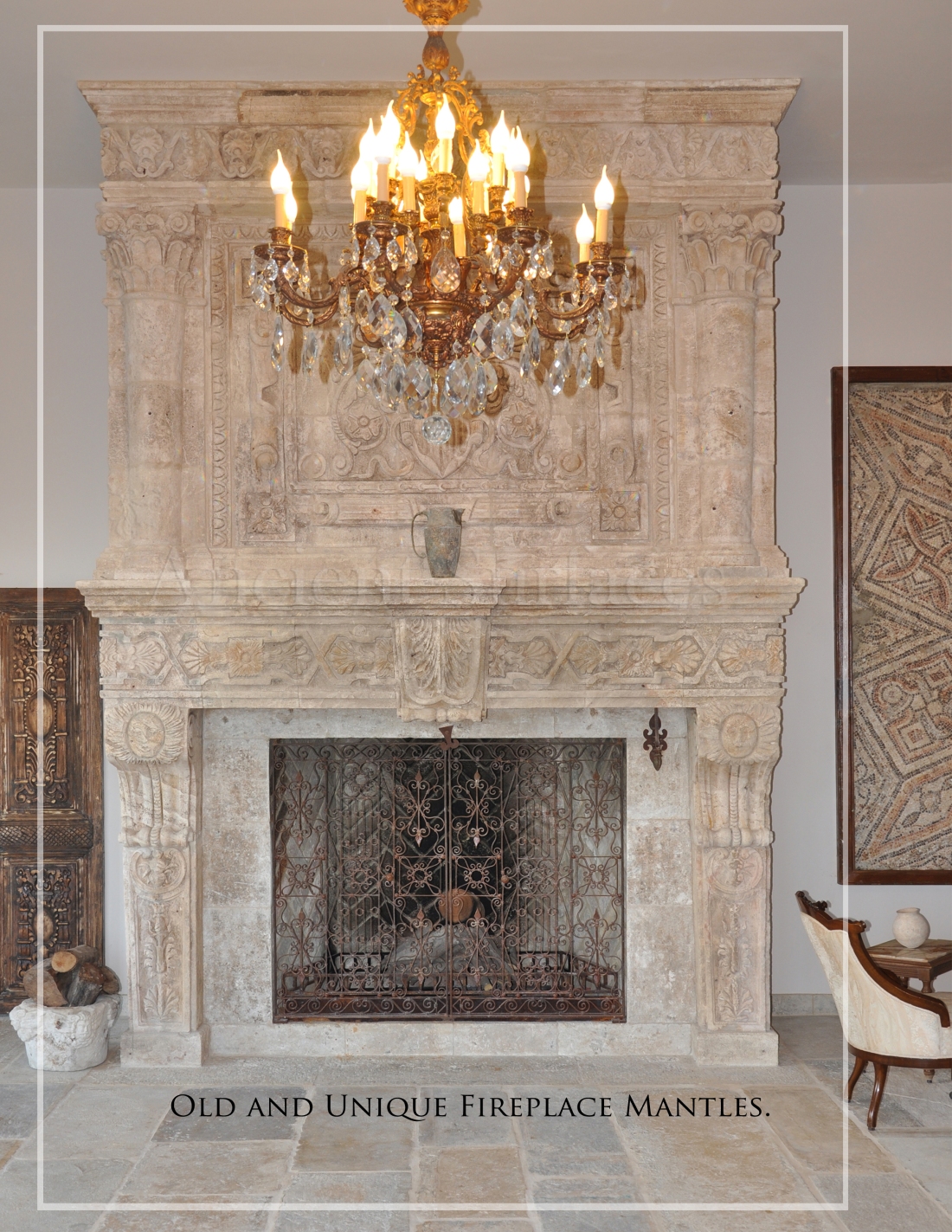 One of a kind antique limestone fireplace hundreds of years old reclaimed and restored by hand, shipped from Spain to a French castle in the Dordogne region close to the Limousine national forest. 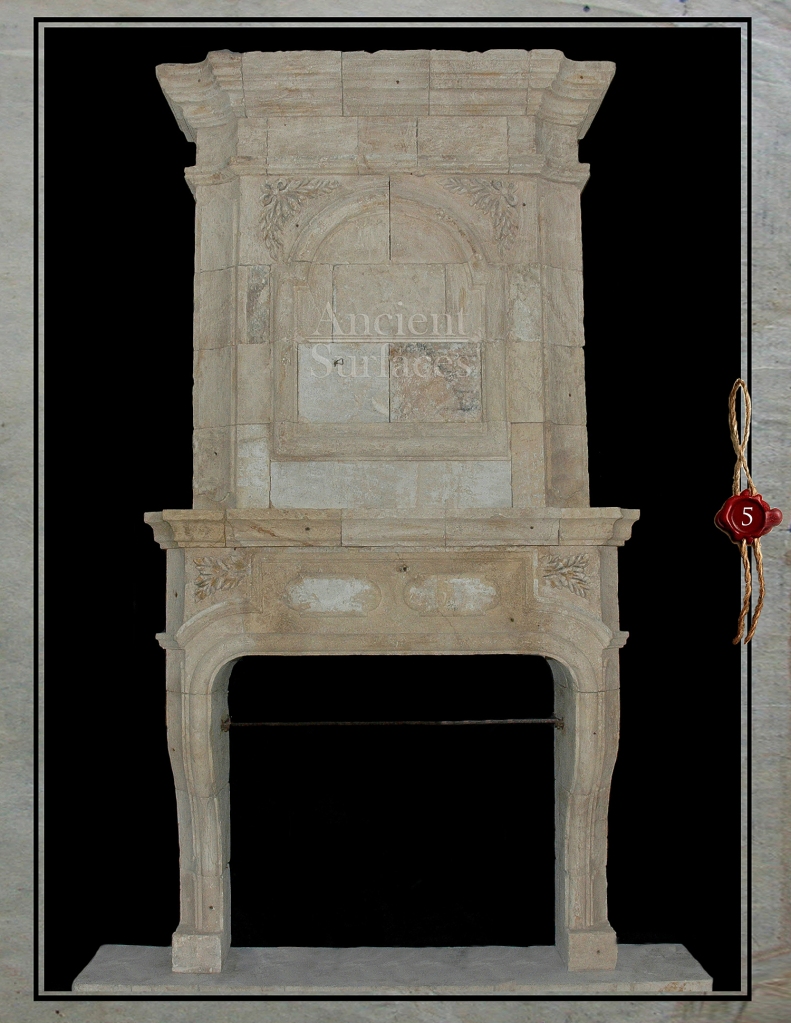 A captivating antique Limestone Fireplace that features an over mantle or a ‘trumeaux’ as its called in French.

A lovely antique stone fireplace with an etched Cross motif on its midsection. This Cross is known as the Maltese Cross. 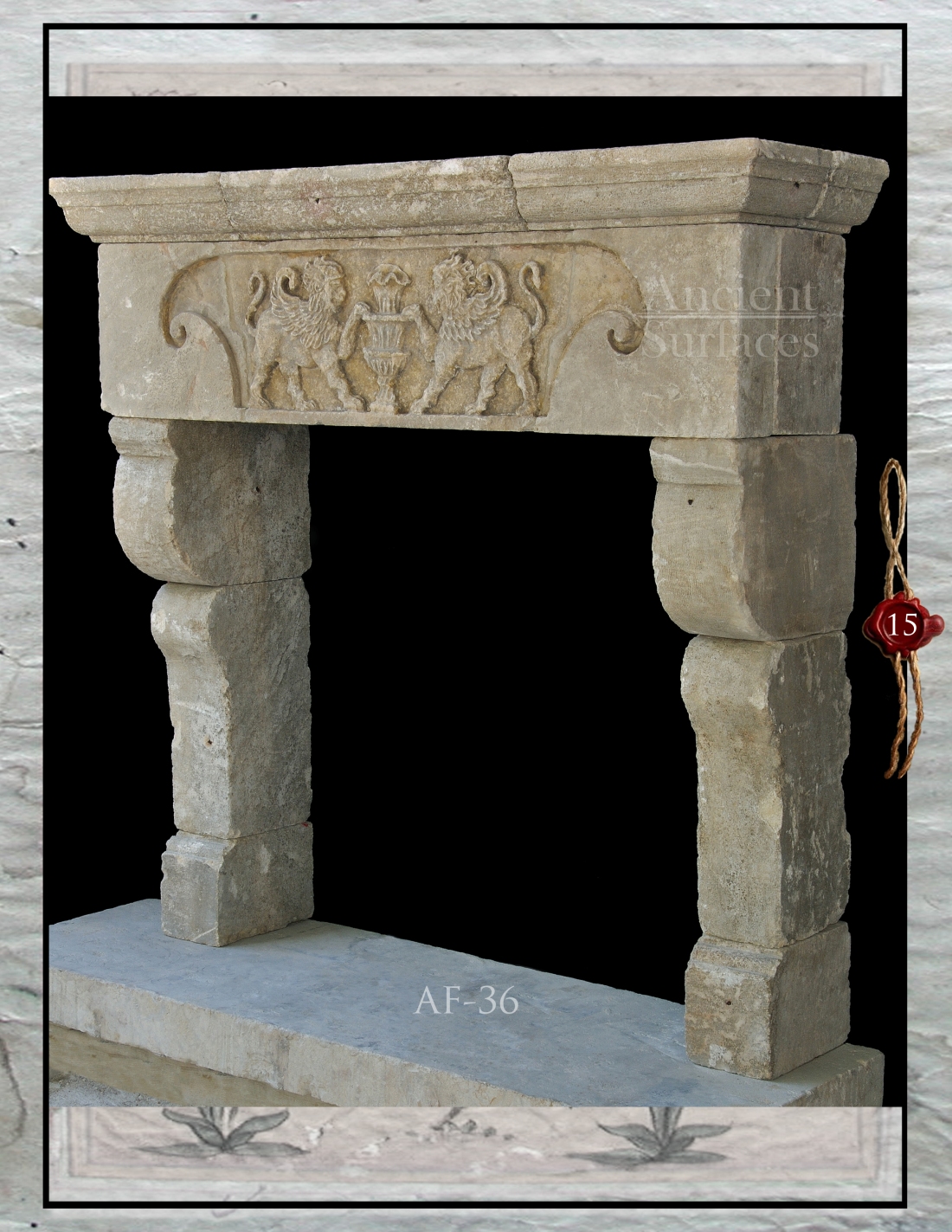 A finely carved crest of two lions flanking a Medici vase is the main characteristic of this antique 15th century fireplace. 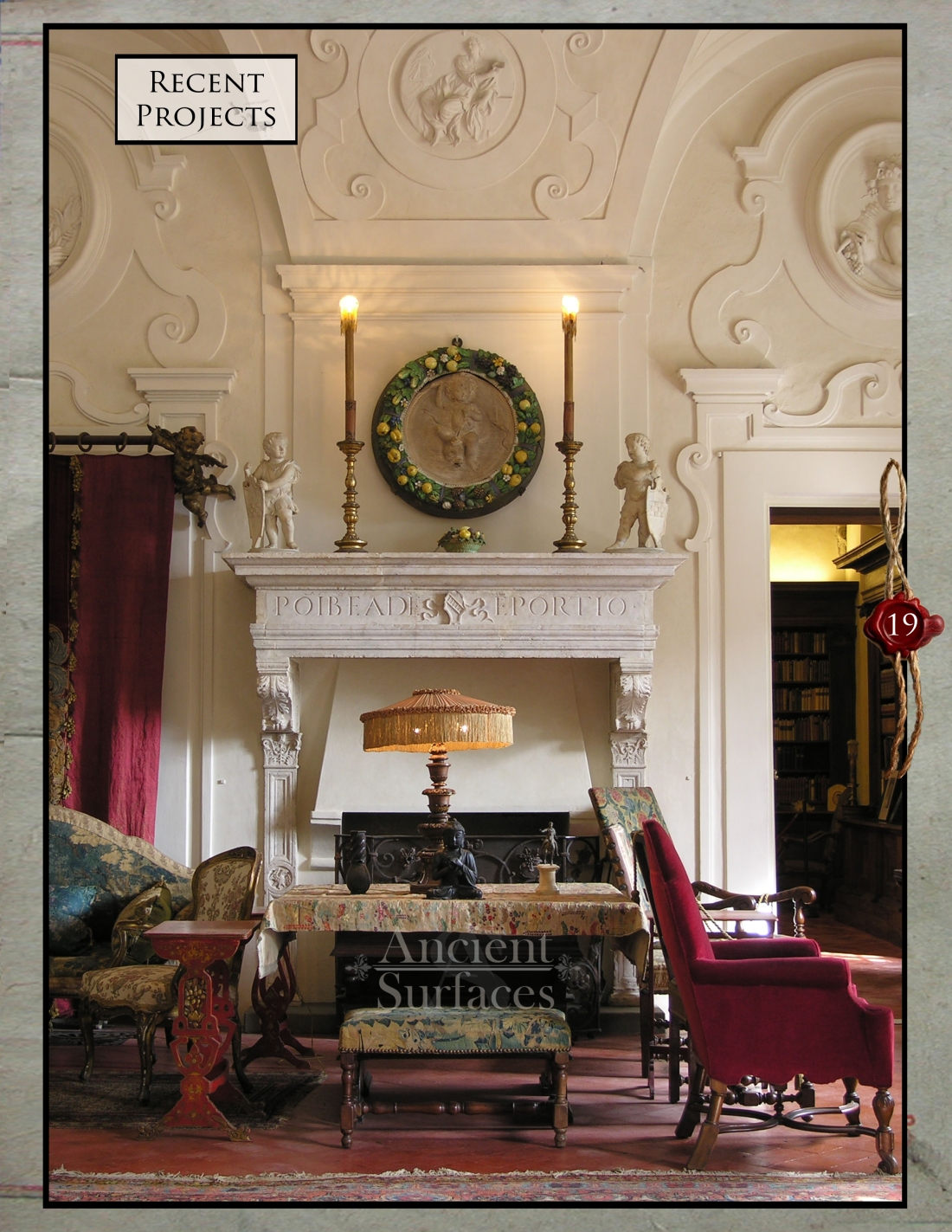 A beige limestone antique fireplace dating back to the 17th century. This lovely stone mantle was restored to its formed glory by the capable hands of our professional artisans who had to change and beef up its top shelf and extend its legs. 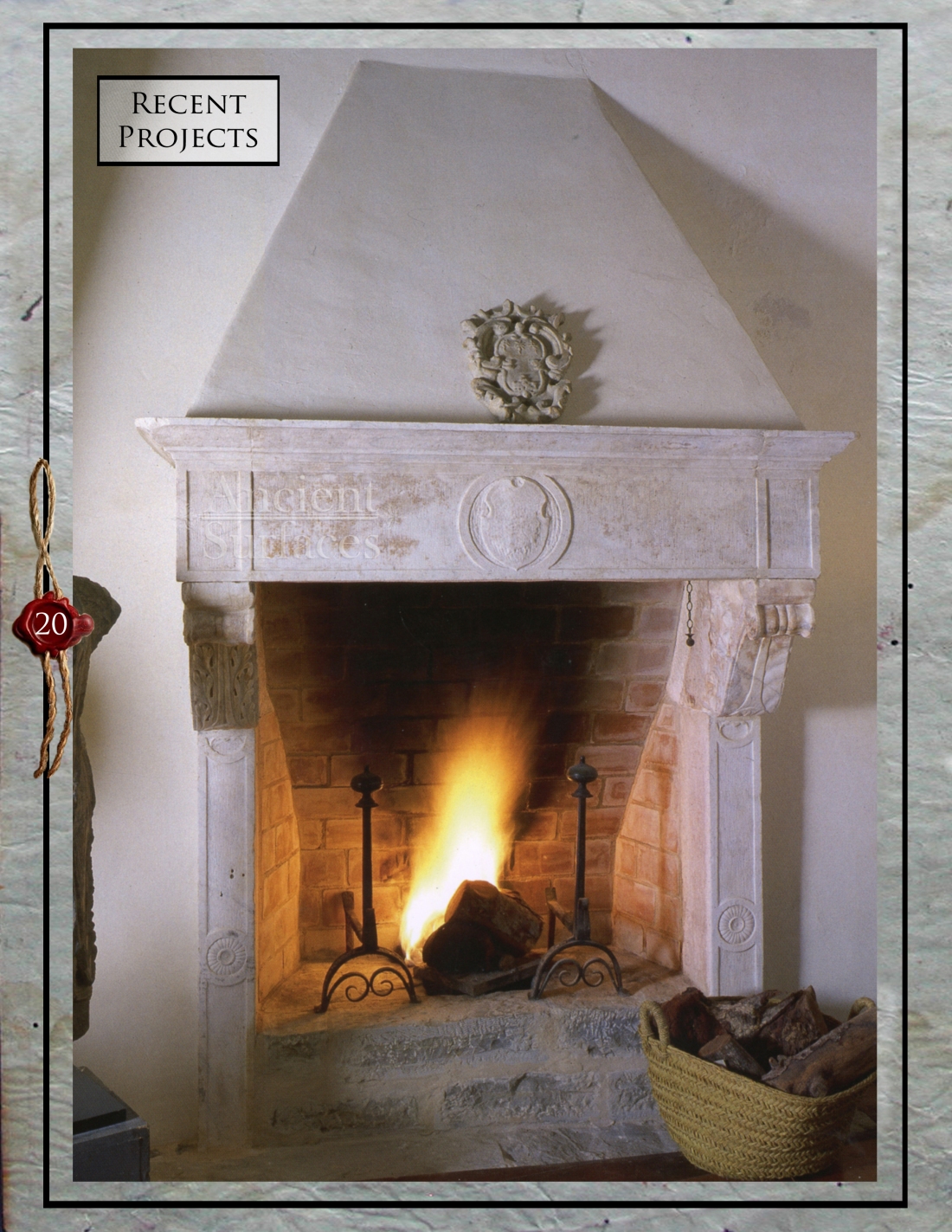 This antique Italian beige limestone fireplace was supplied, restored and installed for this charming private Italian Villa. Over the years, the list of our clientele has grown into the thousands and reads like a Forbes 500 list. 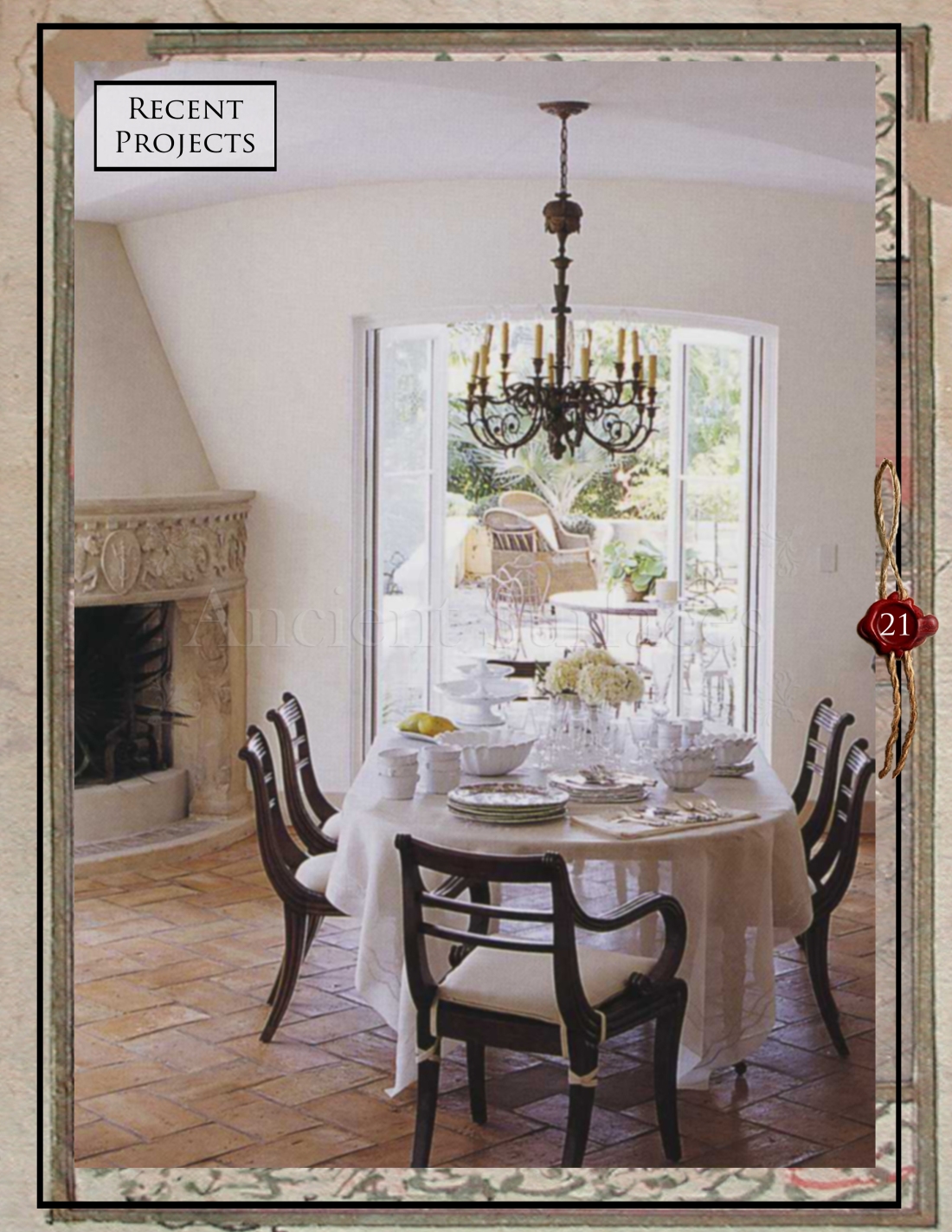 Both our clients and competitors admire the rarity and uniqueness of our one of a kind  Antique Fireplace Mantles that we salvage and carefully (and sometime painstakingly)  restore back to their original splendor without defacing the time honored patina that those pieces have acquired during their temporal journey since their hand carving centuries ago. 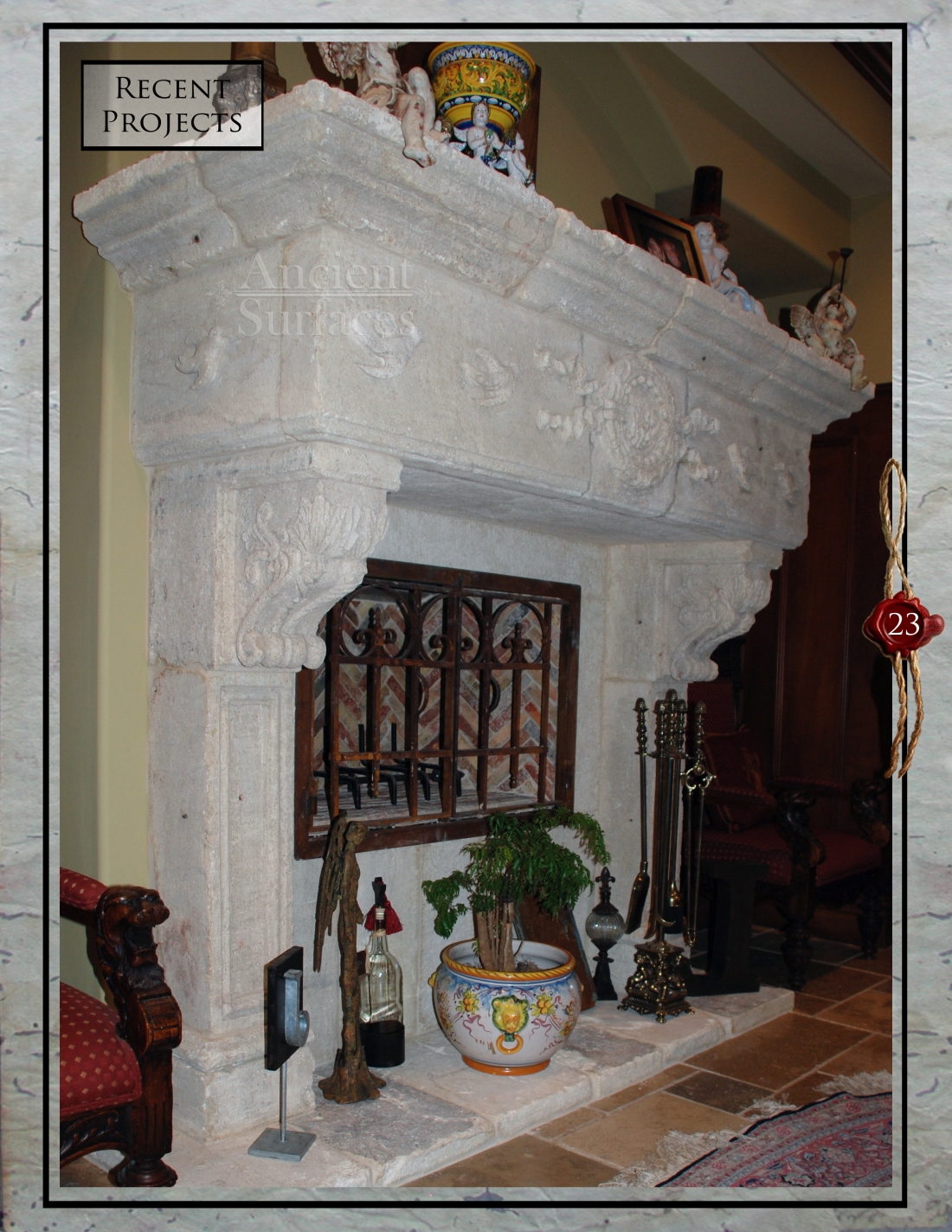 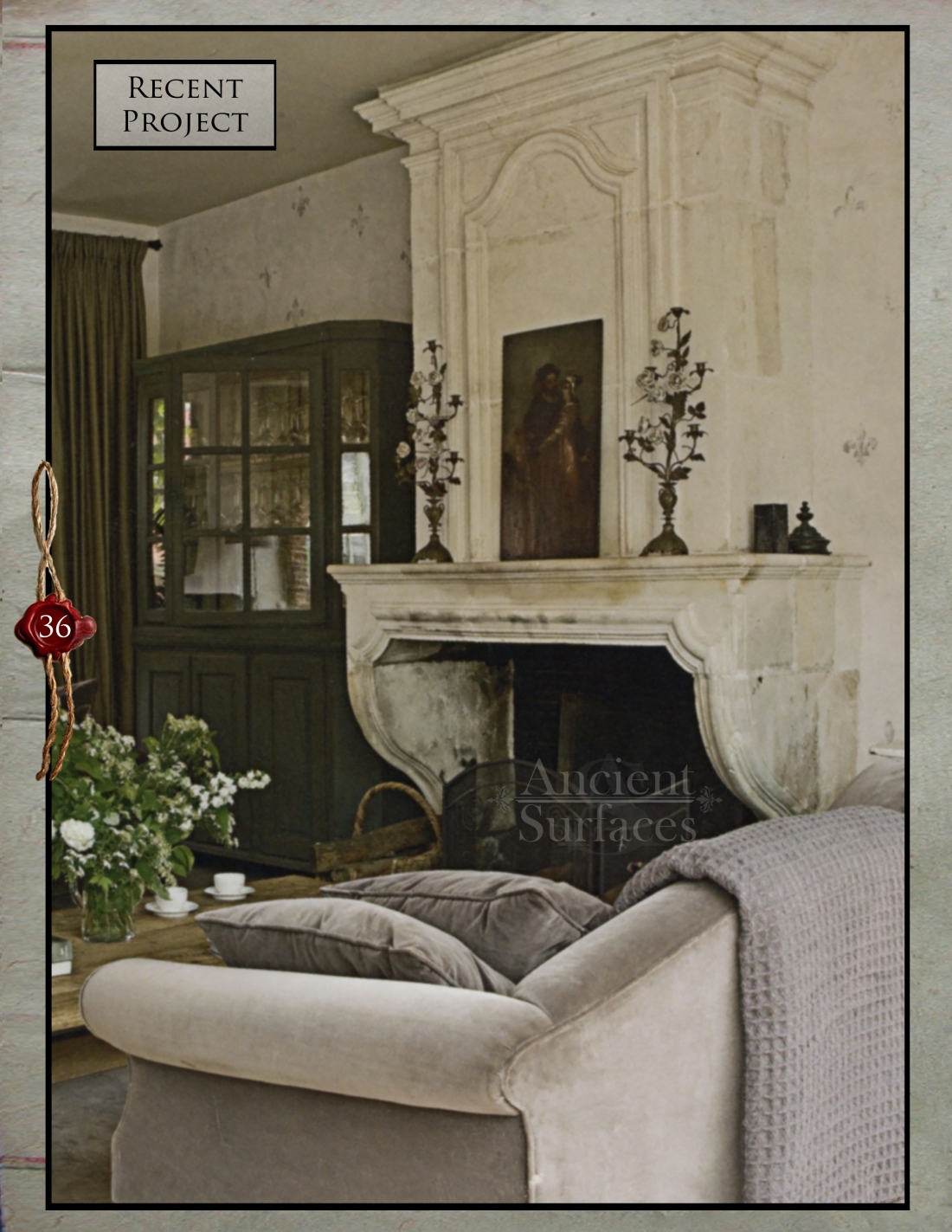 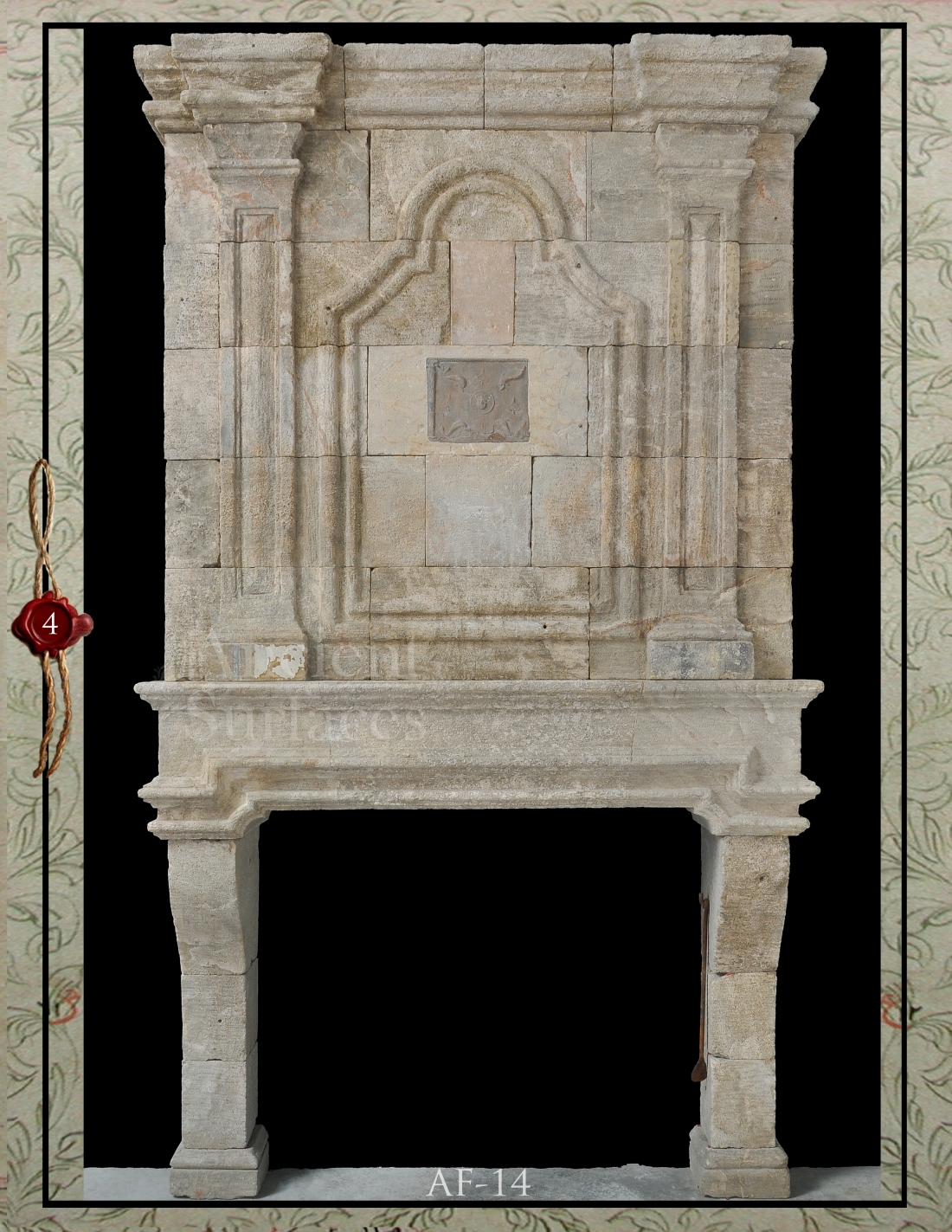 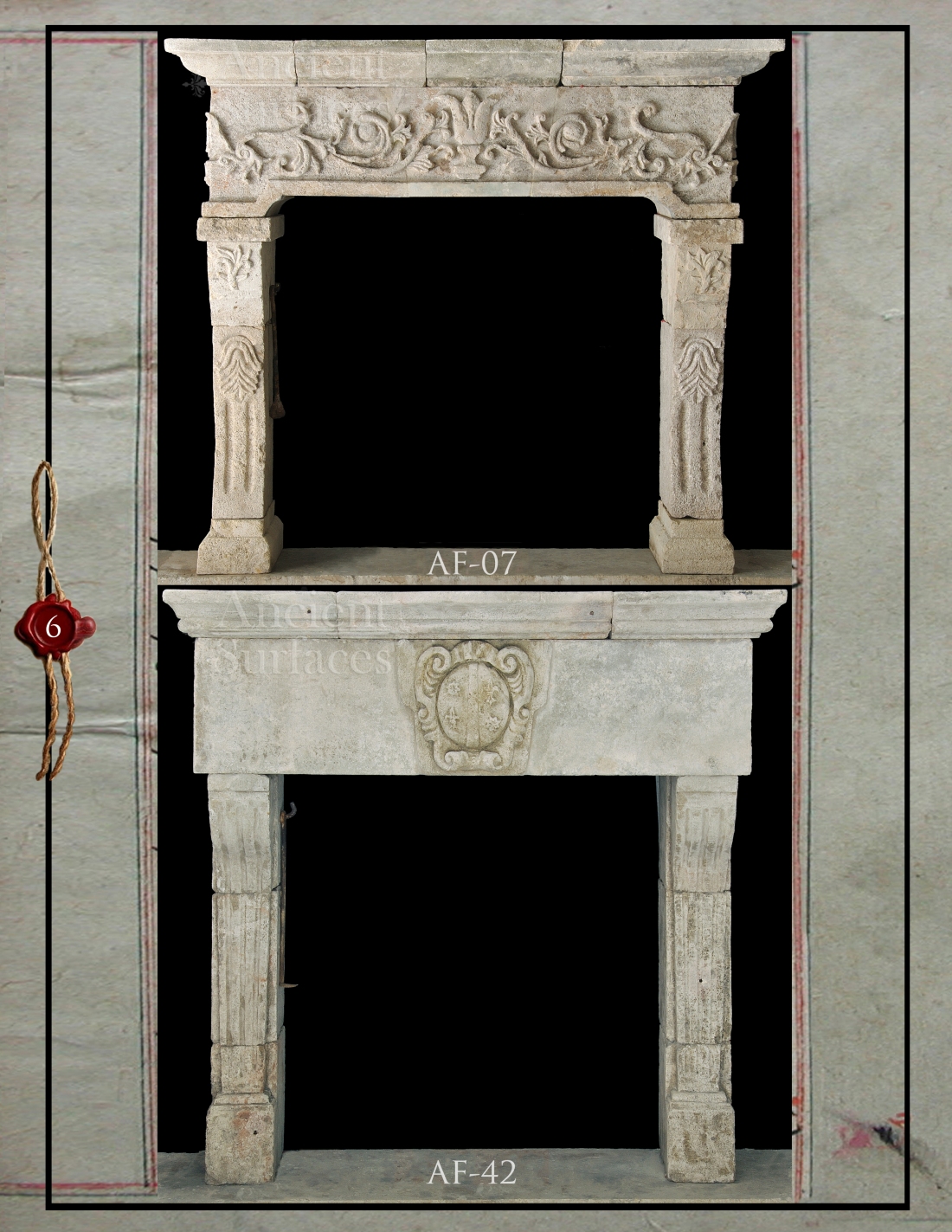 We are trying to move with the times by making our entire Yard stocks becoming digitally available for online viewing. 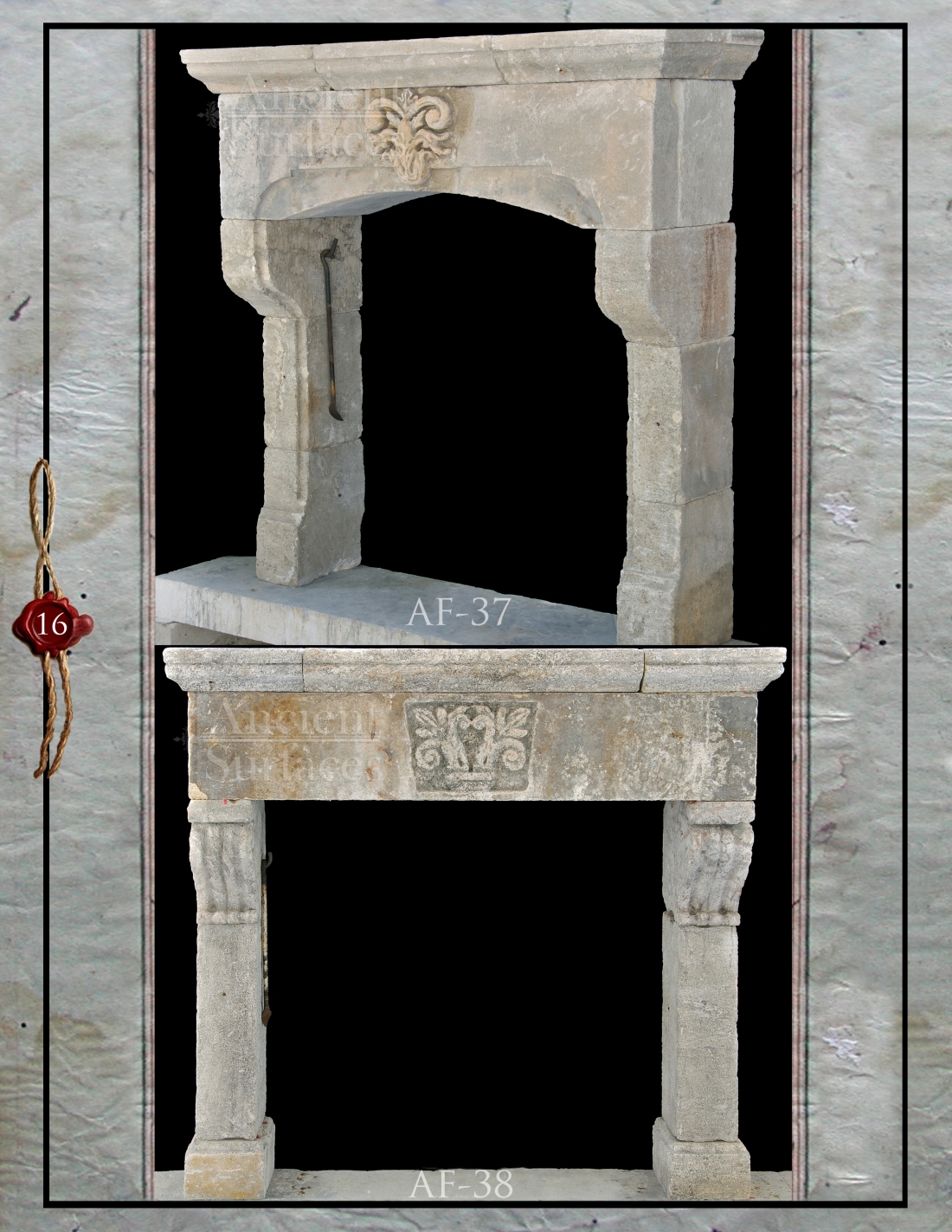 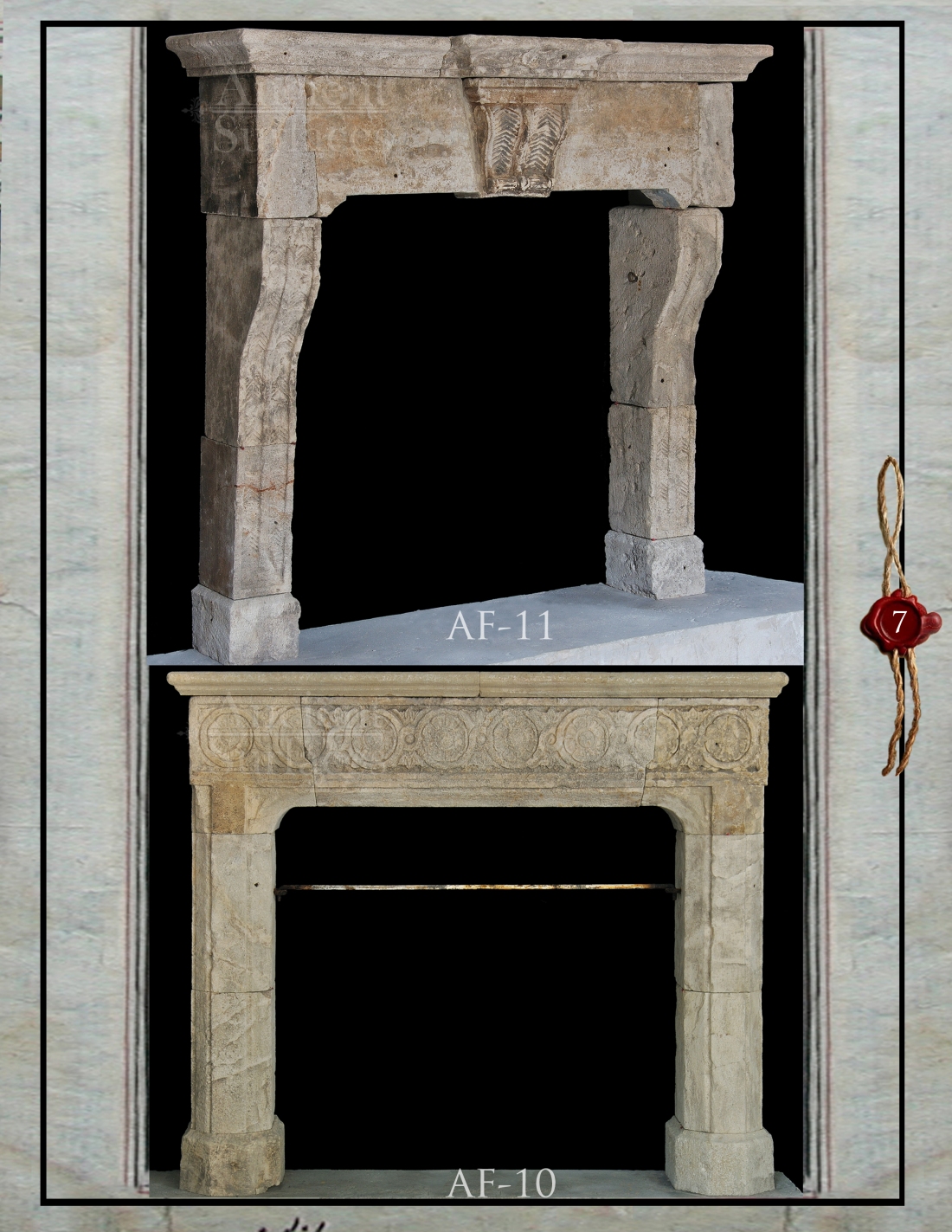 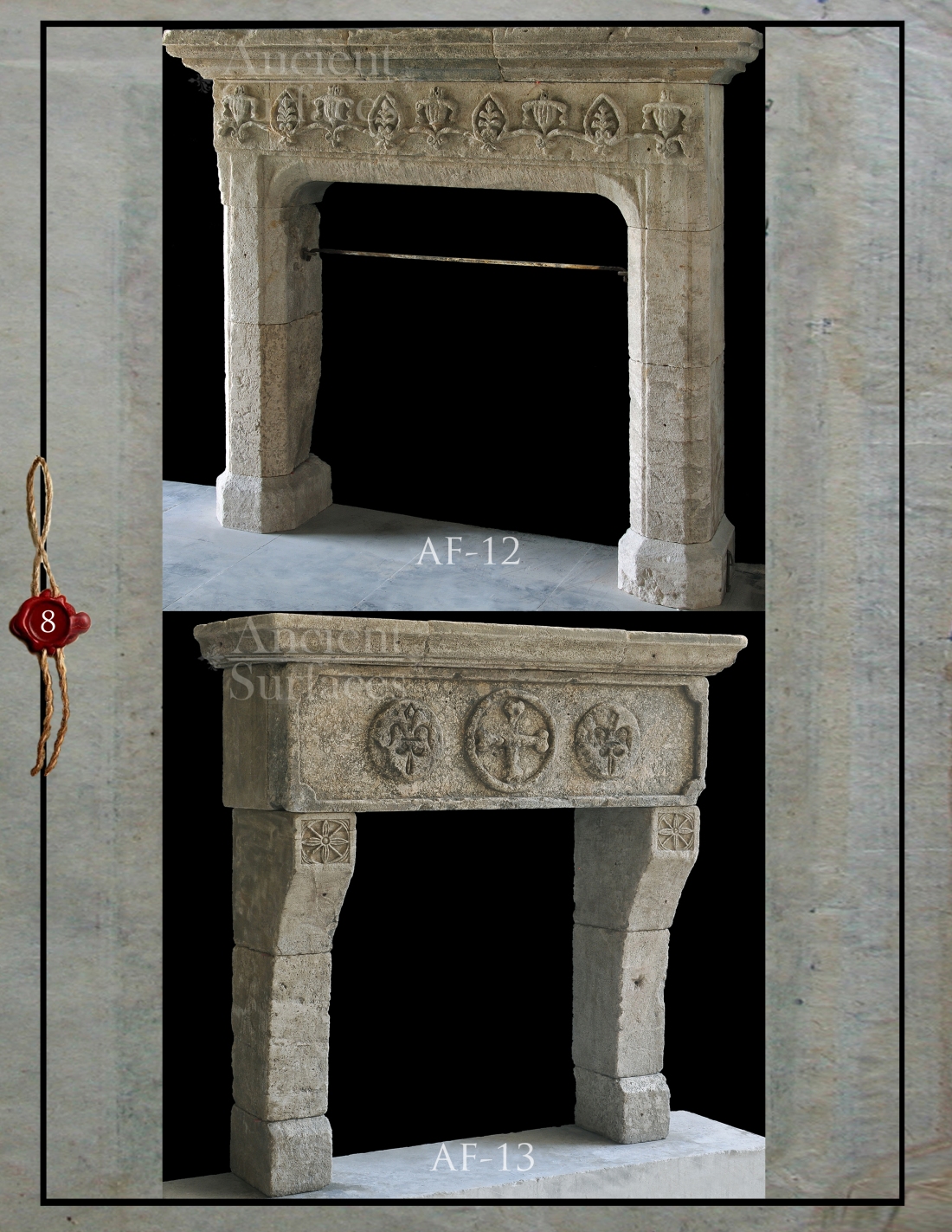 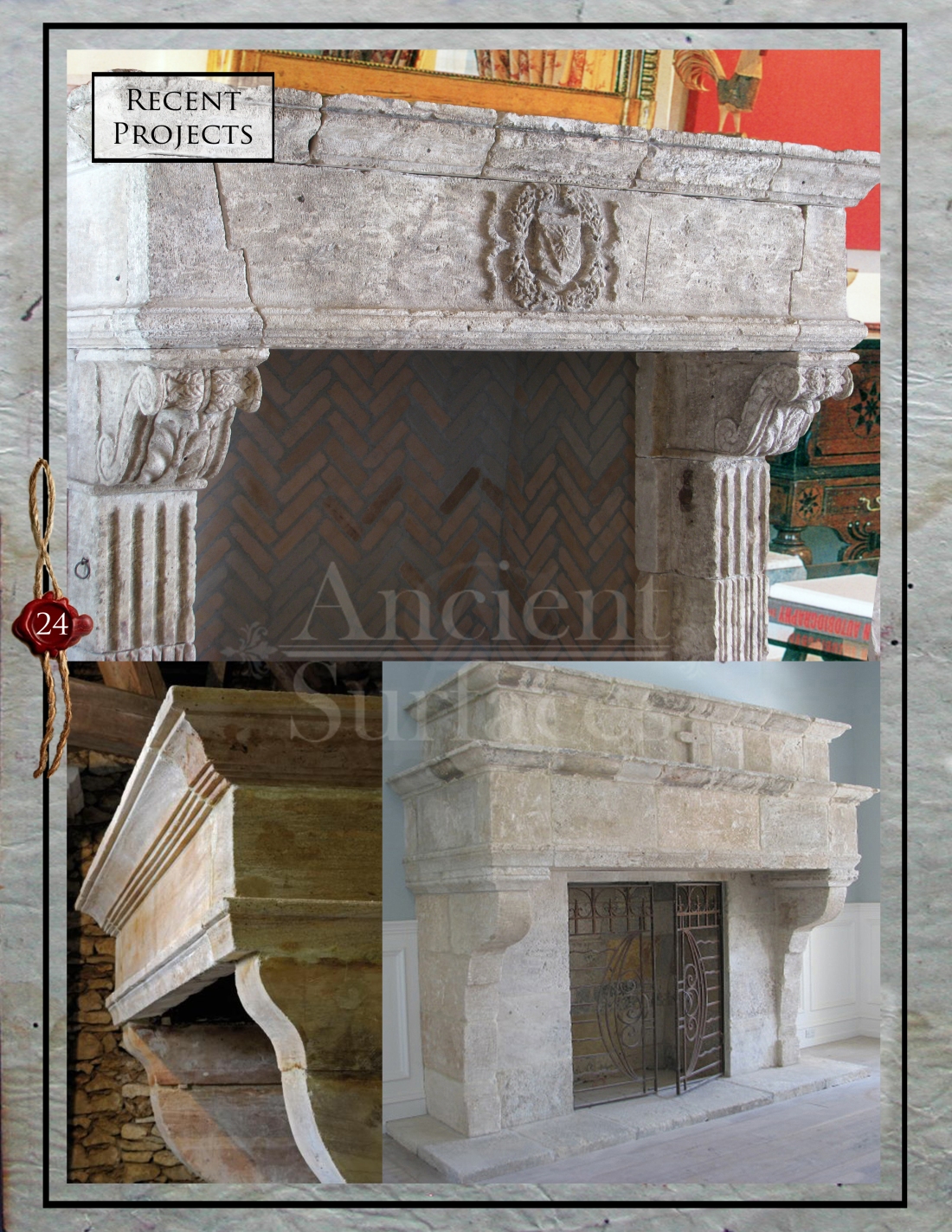 This massive undertaking required tens of thousands of man hours worth of documentation, data entry, archiving and classifications. 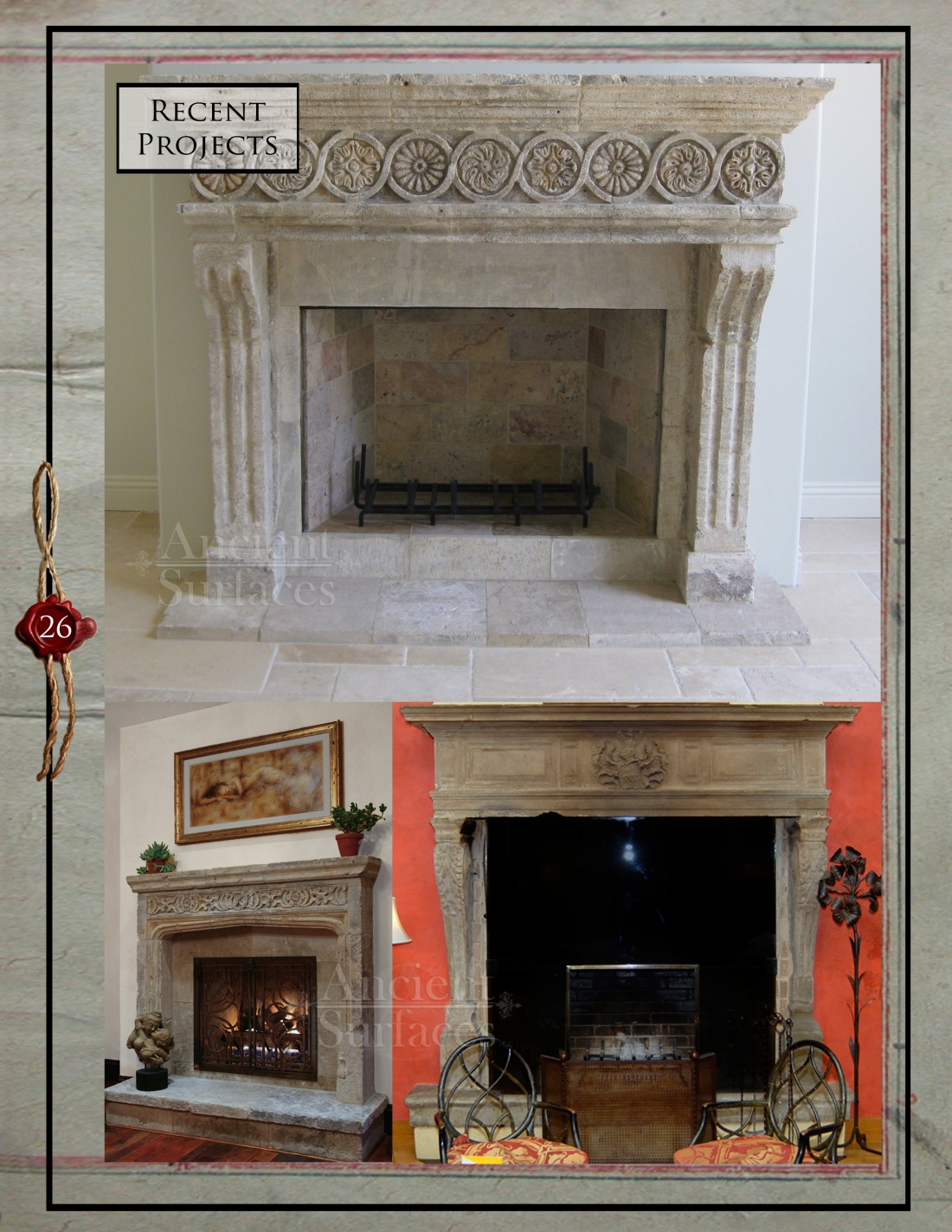 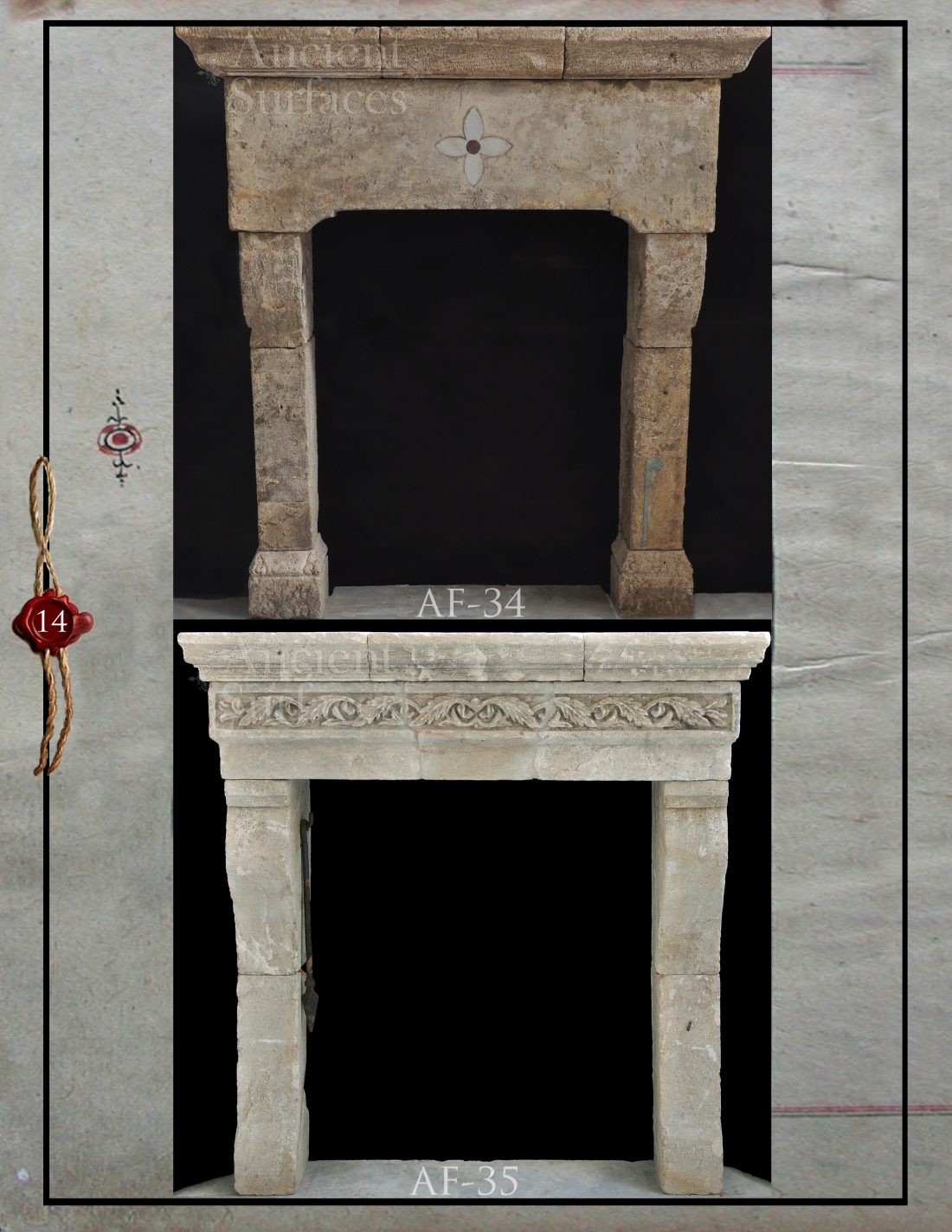 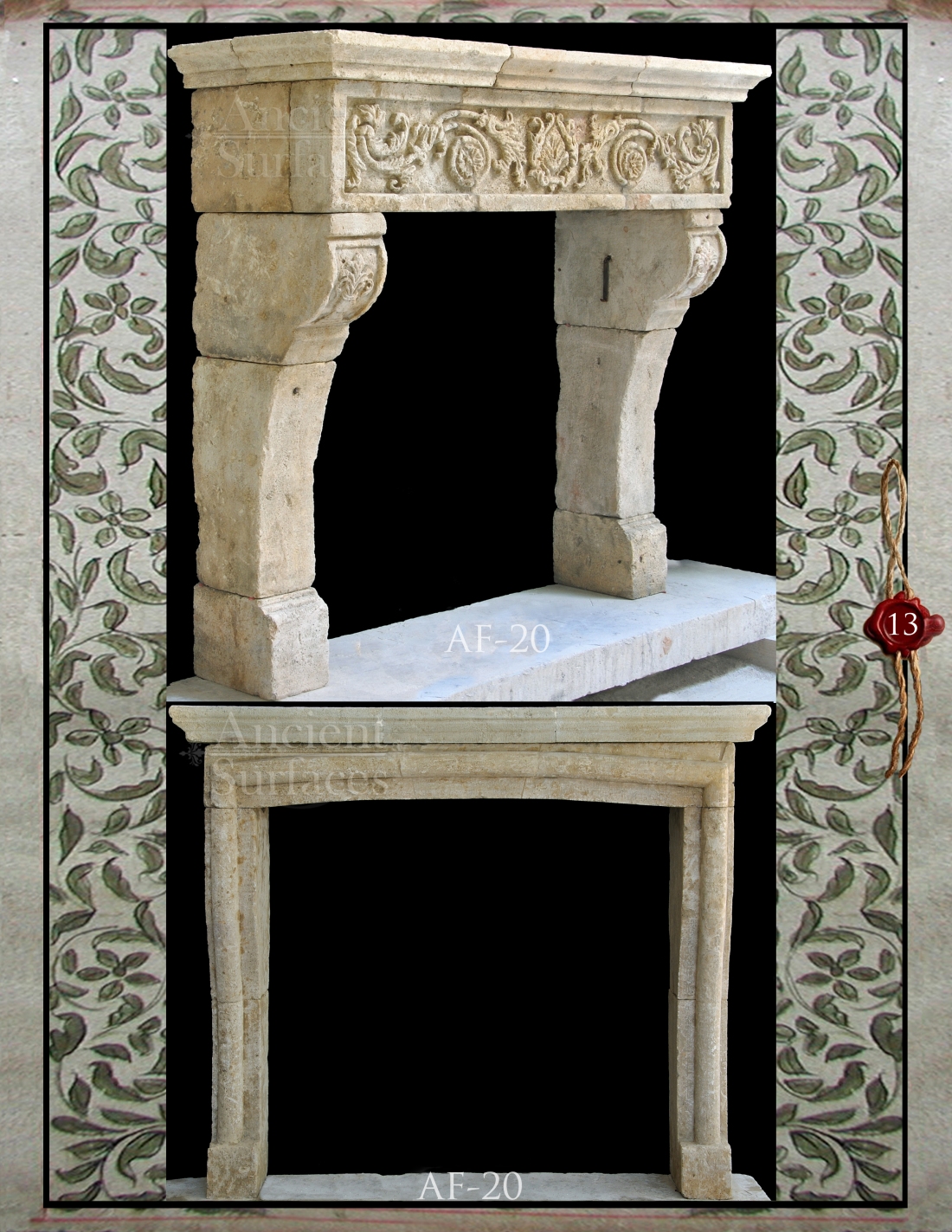 We’ll be keeping everyone updated on this herculean undertaking as the months or even maybe years role by! 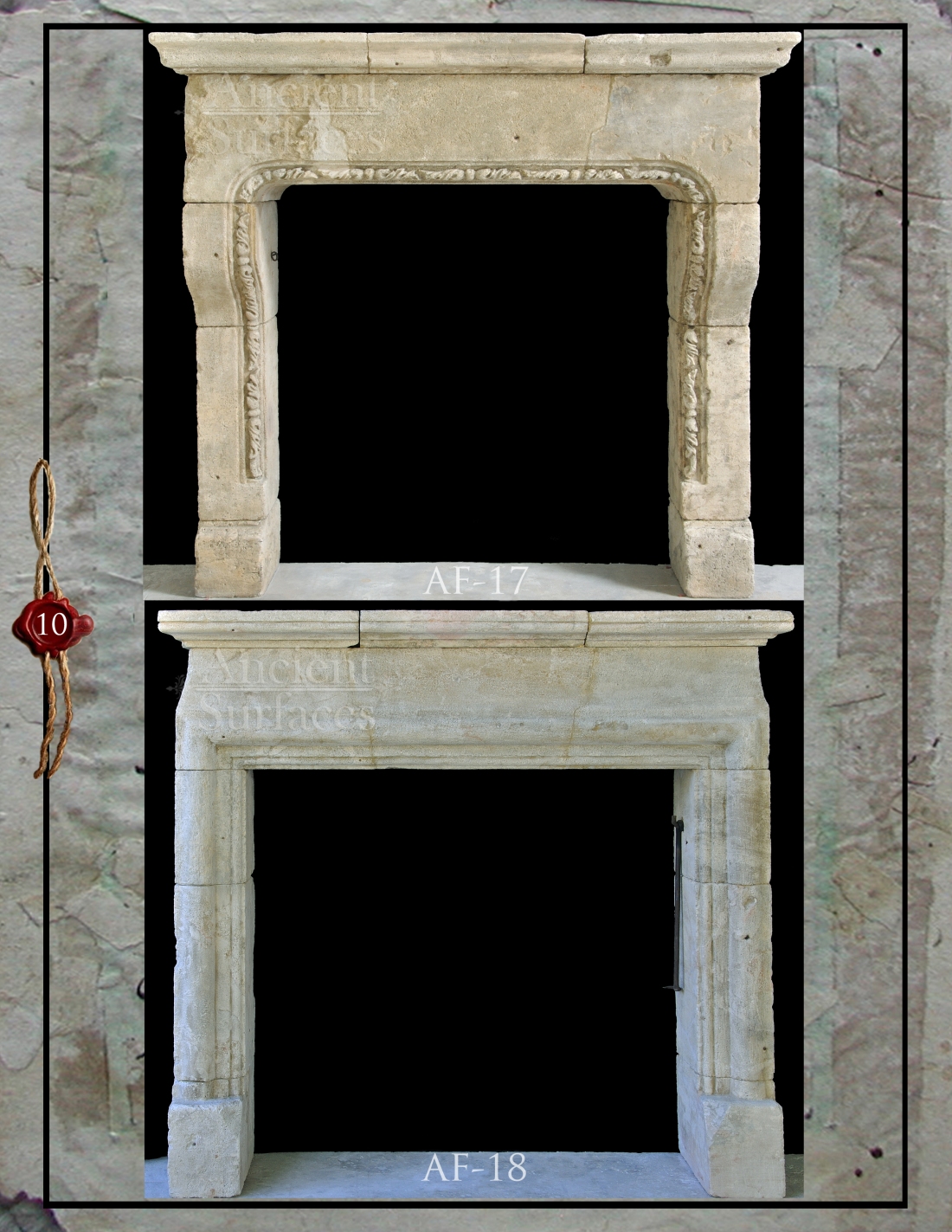 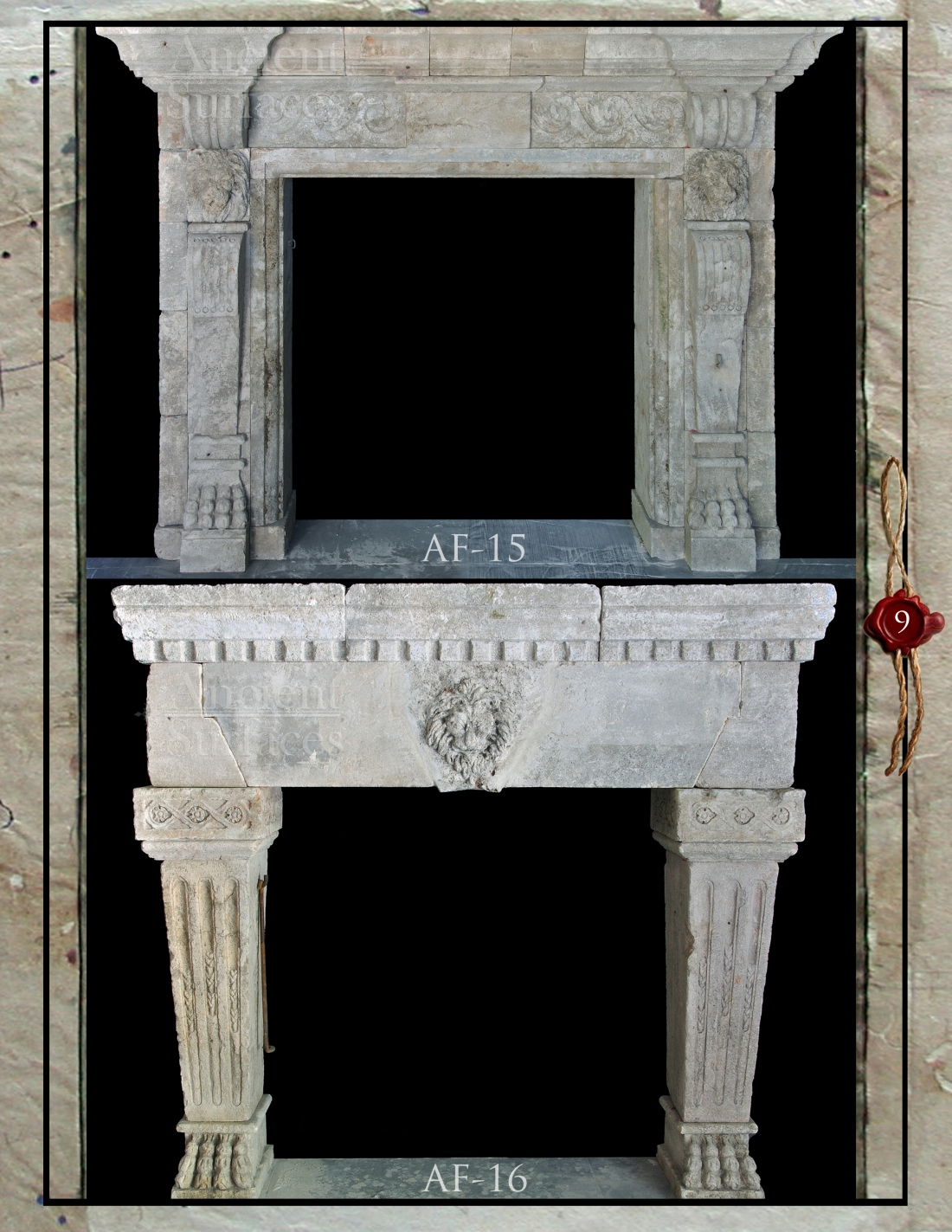 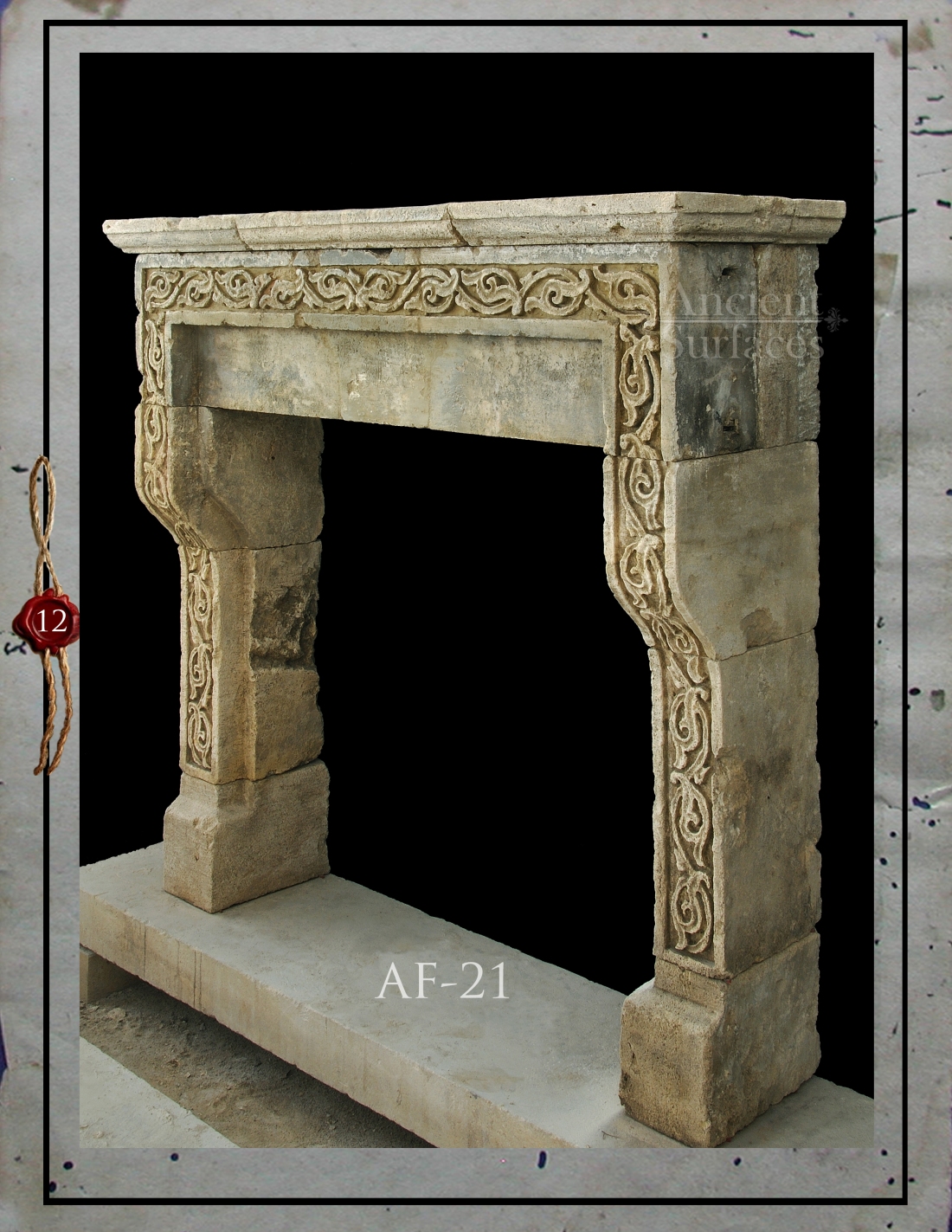 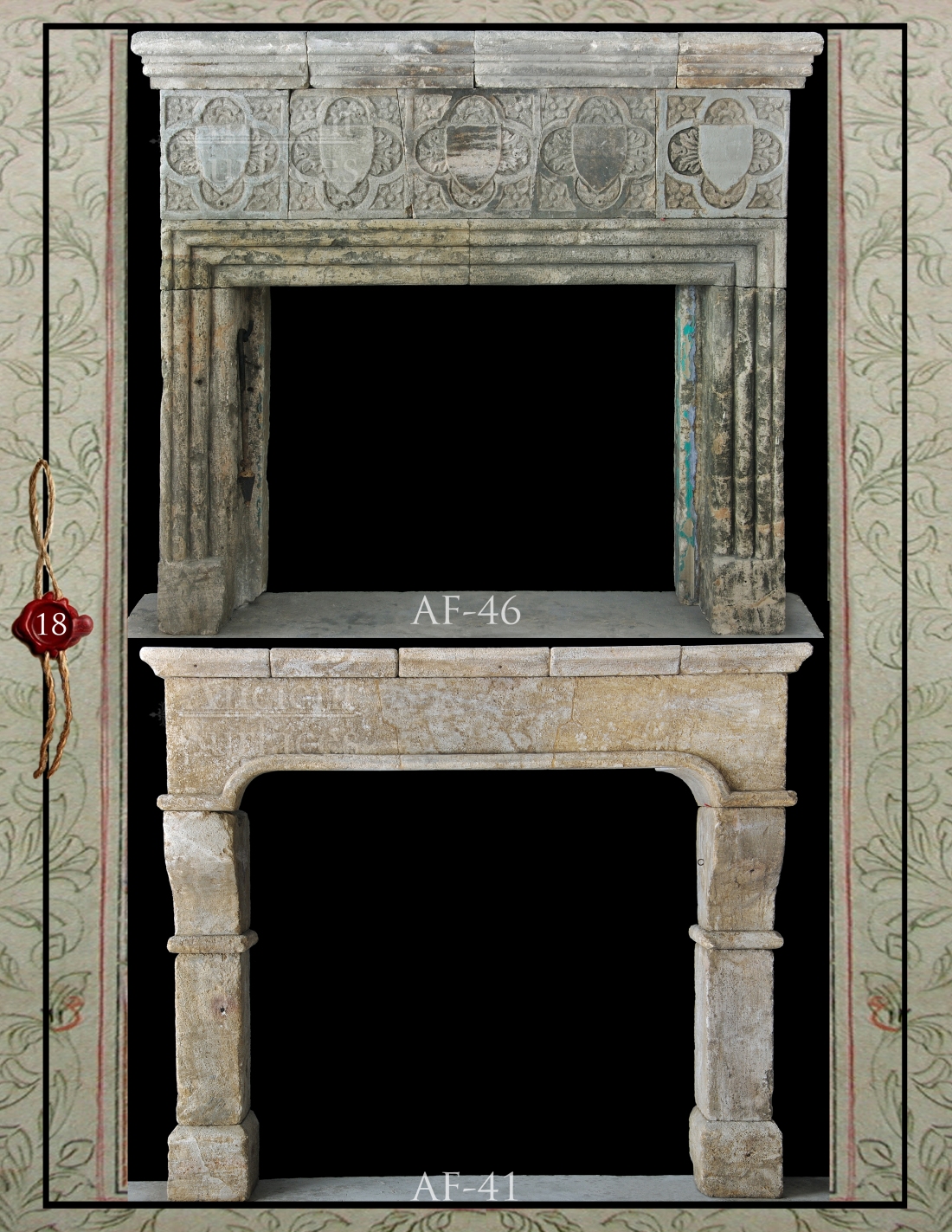 To learn more about those fascinating and unique architectural gems as well as their hand carved exact replicas feel free to please contact us through our website at Ancient Surfaces. 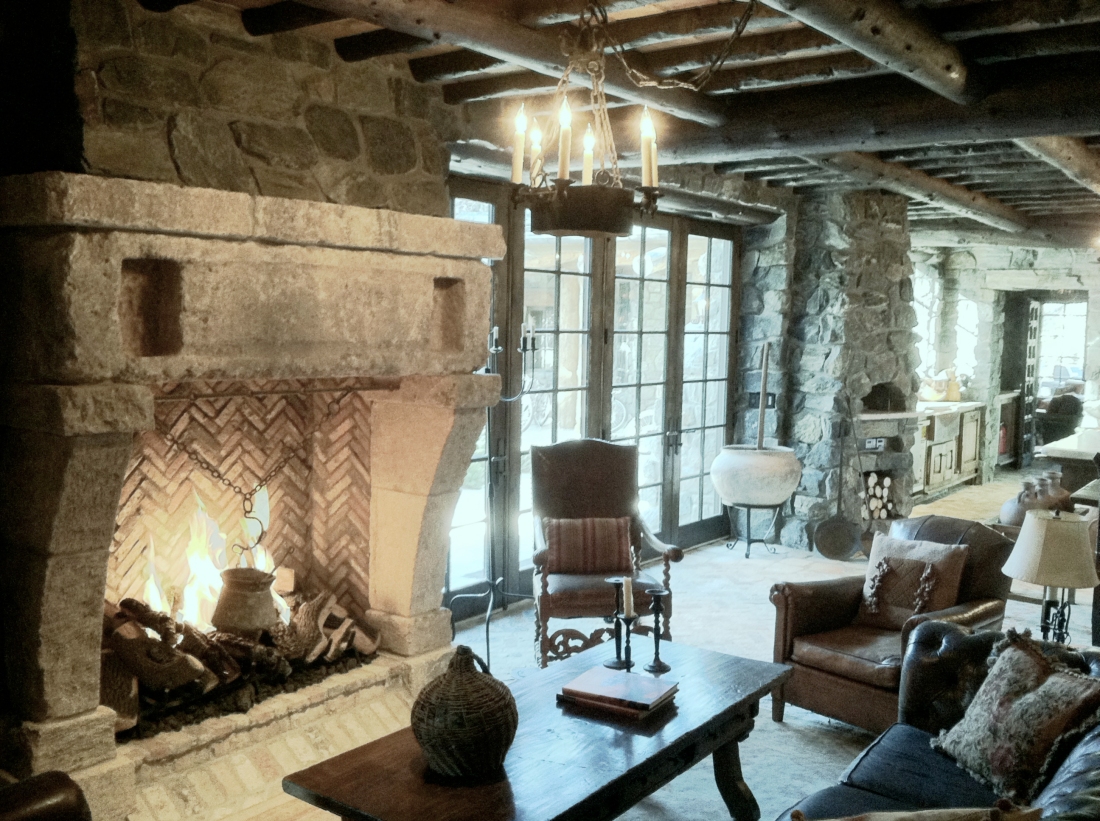 Antique fireplace mantels are important pieces of furniture. They provide a classic look to the living room, warmth and coziness in the bedroom, or a meditative and unwinding therapy by the poolside patio.

These mantels have stood the test of time unlike their brand new counterparts. Also, a good antique reclaimer might offer an arsenal of refurnish antique accessories to complement the whole antique mantels ambiance that you’re trying to create in your home.

Such items include ancient metal gates, antique herringbone brickletts used to line the insides of the fireboxes, to the simple yet elegant and classic andiron and baskets that are salvaged from the 18 an 17th centuries.

Classic timeless pieces from the Norman medieval, Italian and French Renaissance or Edwardian and Victorian eras are the best options to choose from. While choosing from a variety of ancient hand carved stone mantels, generally, those offered by dealers are mainly simple with the occasional corbeled legs to them like the French countryside fireplaces, or with a nice bolection frame or picture frame looking mantles that were common during the late British Imperial era.

Various kinds of stone such as dolomitic limestone, brachiated marble or even basalt rock in some instances were used by pas carvers to create some of Europe’s most elaborate fireplace mantels for the last ten centuries.

So what is the best kind of stone to carve mantles out of? This stone remains uncontested since it grants mantles an eternal durability while allowing them to age gracefully. It’s a great heat conductor yes soft and textured to the touch.

This stone is seen in the most well preserved fireplaces in the world that were once carved out of. It is called the ‘Oolitic Limestone’ and its raw blocks are highly prized by master stone carvers from around the world.

As for the style of mantles goes, the most popular kind of fireplace mantel today are South European or the Tuscan or French Bastide and Normandy styles that are based on one simple philosophy of simplicity equals beauty, as long as that simplicity didn’t stand for losing the personality and historic characteristic that defines that particular fireplace and help set it apart from its counterparts.

Mostly sculptures realized in this style were a simple way for countryside residents to have functional yet elegant hand carved stone mantle that resonated with the simple countryside way of life.

They still offered a perfect balance of design and proportion based of the utilization the ‘Golden Ratio’ and ‘Golden Mean’ and by utilizing many other carving and visual tricks like the play on the visual perspective, ‘Chiaroscuro’ shade manipulations, ‘Foreshortening’ the play with lines, and ‘Sfumato’ which consist on blurring or not fully carving a section to give it a perception of distance.

All European regions are splendidly depicted in the mantel designs that originated from them. They speak volumes of the old continent past vestige and it’s timeline. When designing a house selecting the style of the fireplace will help you define the overall type of the home you want to build and live in.

The earliest known mantel piece is the one in the Kings House in Southampton. It was carved in the 12th century and is a classic example of splendid old masters craftsmanship.

A very wonderful example of the early Renaissance style fireplaces is the mantelpiece of the ‘Palais de Justice at Burges’. Seventeenth century English era saw the introduction of pure Italian style of fireplace mantel pieces.

These mantels were very simple in style but had an elegant look. It was only in the latter part of the 17th century that bolder and molding styles were introduced. In the 18th century the rise of French style of architecture was seen and the designs of the mantels too were influenced by the French style.

The other different but very elegant styles of fireplace mantels include the Classic Tudor, Jacobean, Victorian, Georgian, Gothic, Louis Style, Pompadour, directories… Antique fireplace mantels of the above mentioned eras and designs have gained a lot of popularity today.

There’s a good chance that most antique fireplaces you purchase on the market today would have originated from France or Italy where a bulk of architectural antique salvaging, acquisition, sale and storage reside.

In recent years a sensational thirst for rare and unique stone elements have surged all around the English spoken world from England to the United States and from Australia to Canada.

This recent spike in demand had put the pressured on supplies of genuine antique stone elements especially on one of a kind antique fireplaces. To learn more about those fascinating and unique architectural gems as well as their hand carved exact replicas feel free to please contact us through our website at Ancient Surfaces.

We still consider ourselves apprentices who are in constantly pursuit of perfecting our craft by learning more and more about our past and how to better merge it with our present contemporary setting because once you stop learning about your roots and origins you stop caring about your future projection and stop growing as a company or as individuals.

To learn more please visit our Website at: http://www.ancientsurfaces.com/Antique-Fireplaces.html