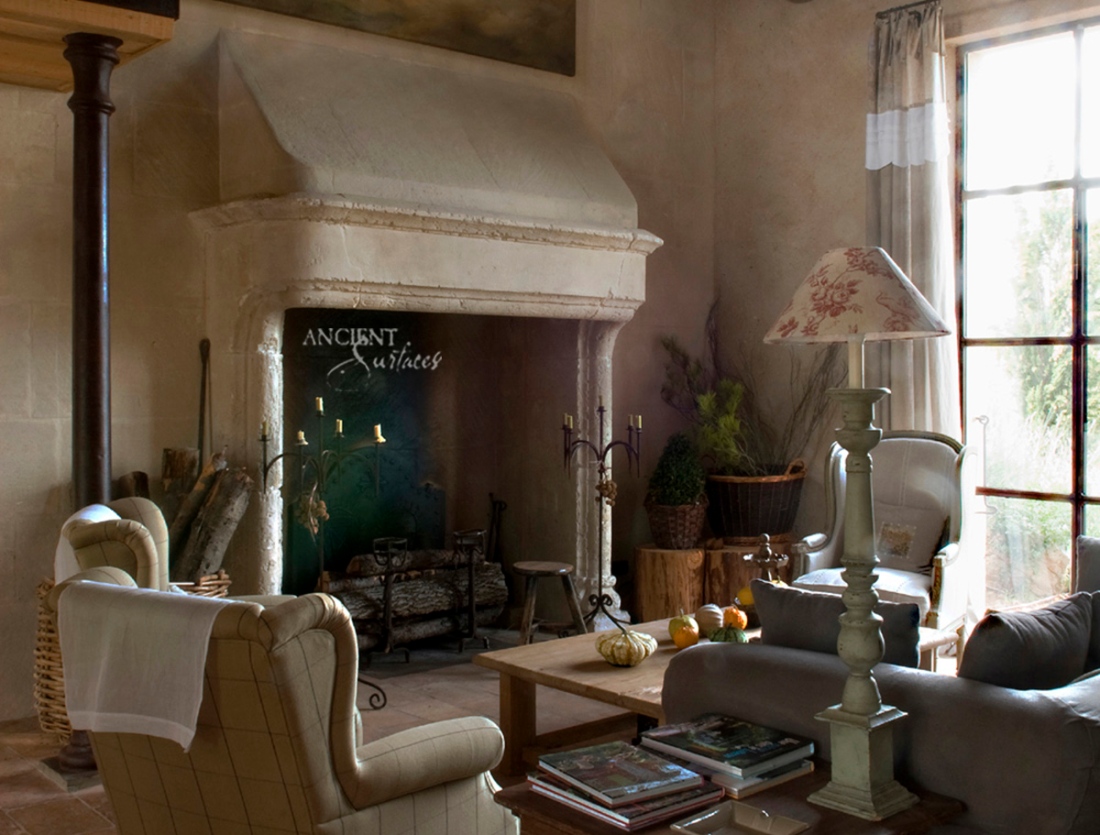 Isolated and scattered across the fertile Medieval French country side, old farms were built according to two techniques. One mixed clay earth, mud filling between weaving timer and stone to make up its walls, the other was strictly made up of Thick limestone walls. 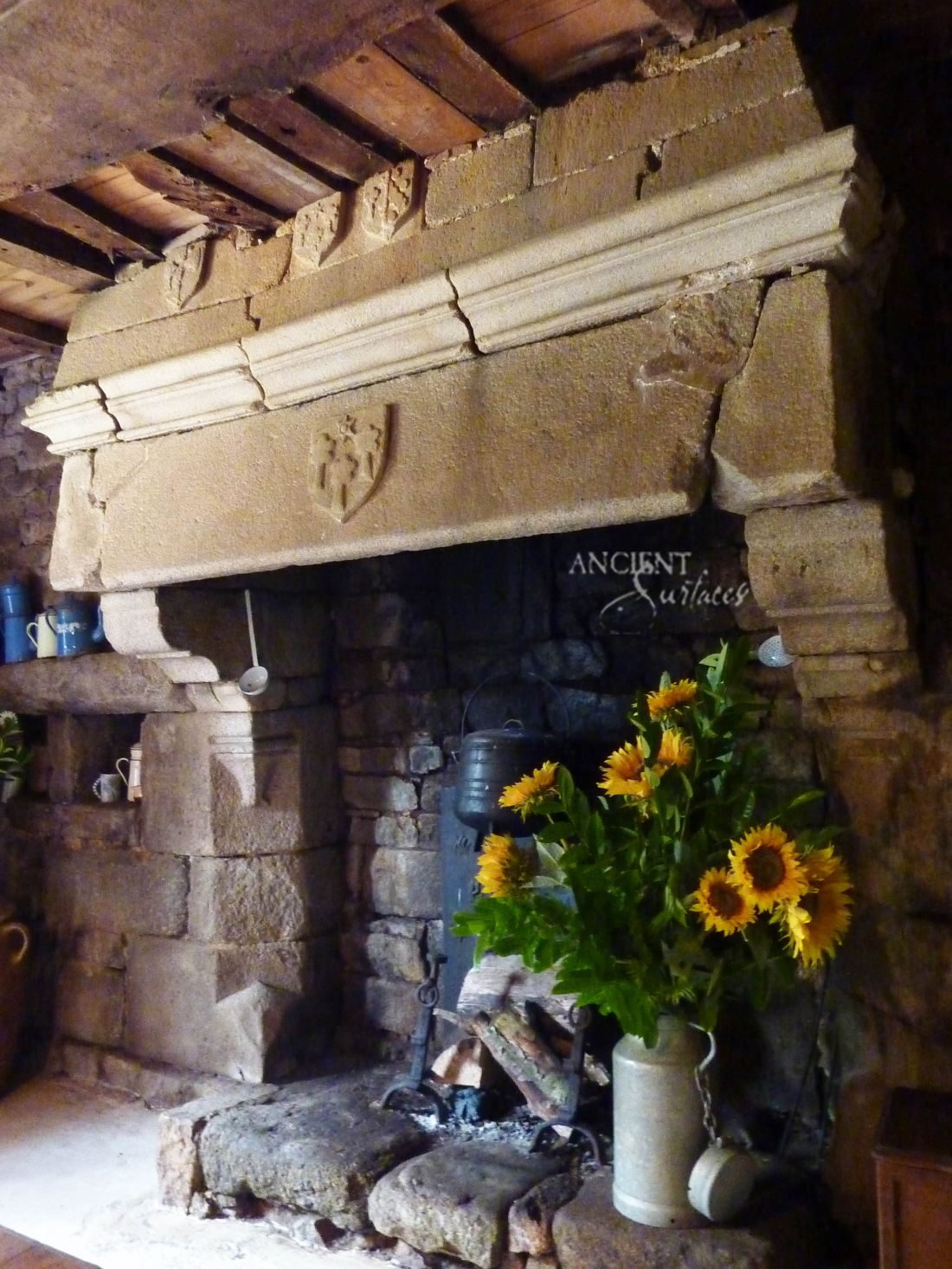 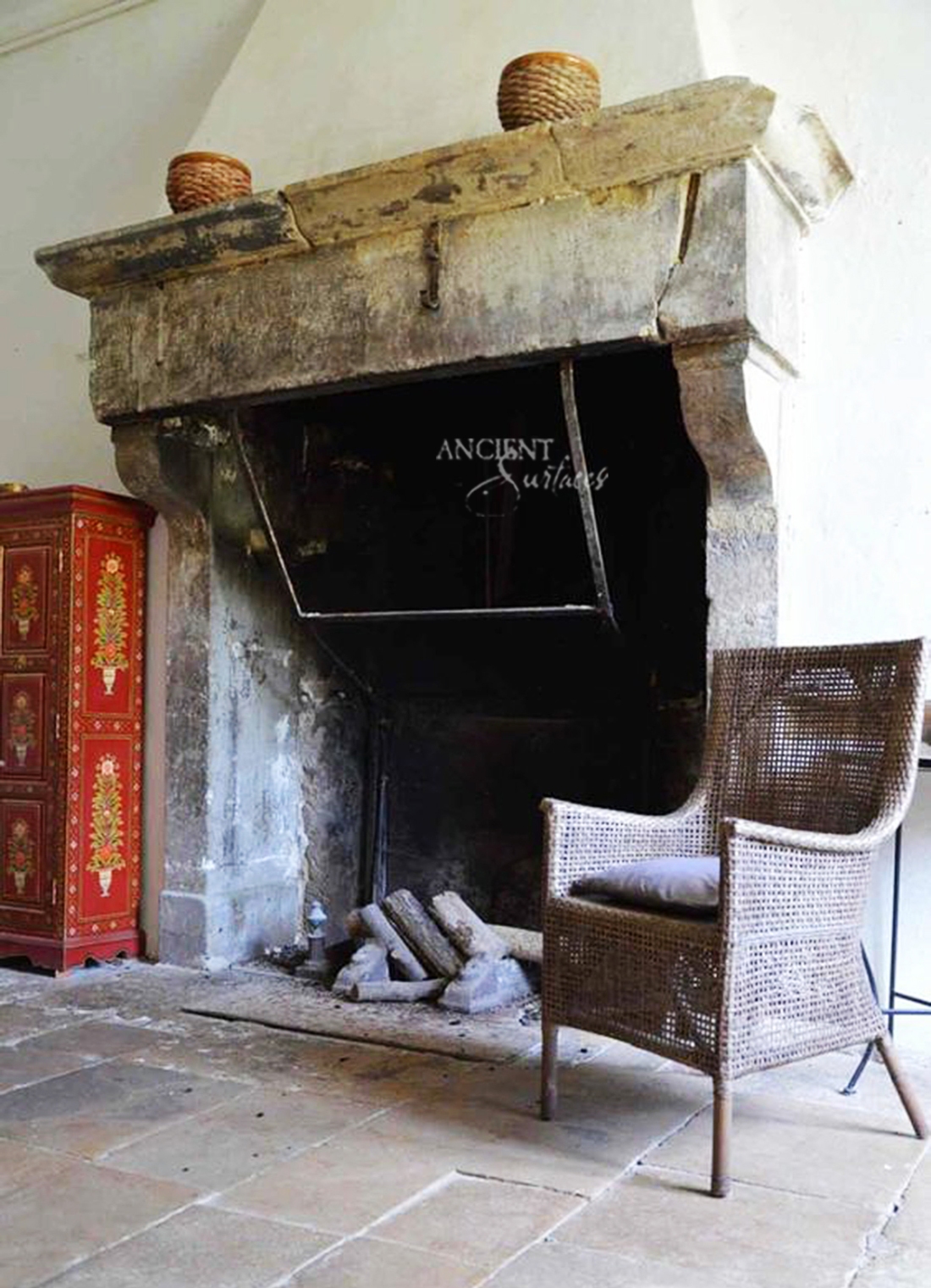 The famous “Sarrasine” fireplaces (for foreign in French perhaps referring to the Moors or the Normans) common to both types of Medieval French Farmhouses were shrouded in mysteries. This class of ancient limestone fireplaces which sport massive firebox openings, reminds historians of the Gallic fireplaces found although the region of ‘Bresse’.

Since the 16th century, Bresse cultivates maize which was brought in into Europe from the Newly discovered continent of America. In less than 50 years this plant transformed the French farmland serving as an ideal fuel for both man and beast alike. 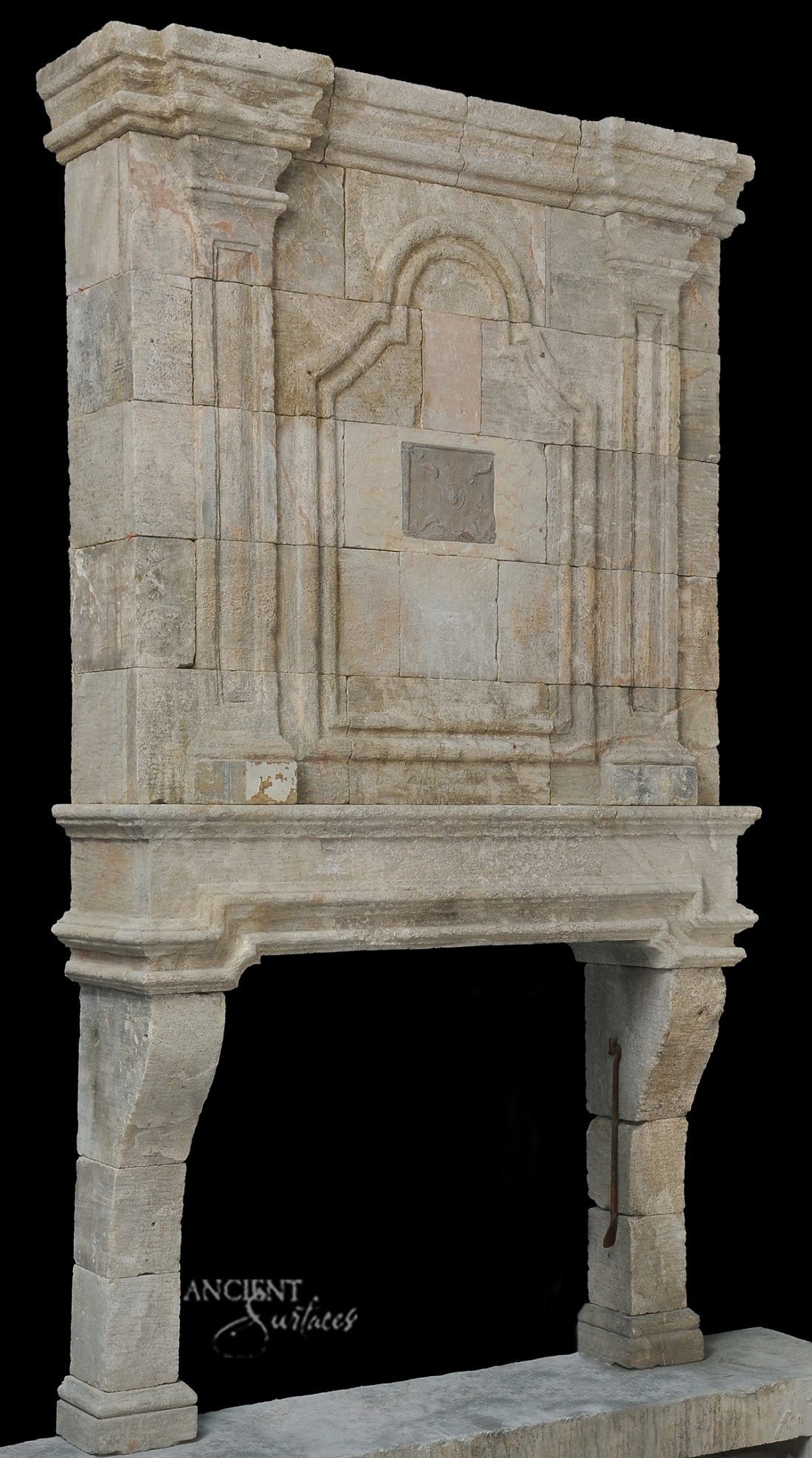 Farmers now had somewhere between 30 to 50% more money coming into their pouches every year thanks to corn. The Bress Farmers became the ‘Nouveaux Rich’ of their time and their newly acquired fortunes earned them famous nicknames such as bressans “yellow belly farmers”.

The lasting evidence of Bressan flourishing rural past, can still be witnessed by the priceless architectural treasures still found in their surviving farmhouses. The millions of ancient hearthed fireplaces stood the test of time and have become the symbol of the Bressan farm house and formed the basis of its architectural heritage.

Wealthy farmers splurged real well on massive living room, kitchen and dining room fireplaces. back then a good fireplace could cost the family as much as their entire farm house but corn was plenty and the money kept on flowing.

What better way to keep up with the ‘Pierres’ than having a bigger and meaner fireplaces than they did? 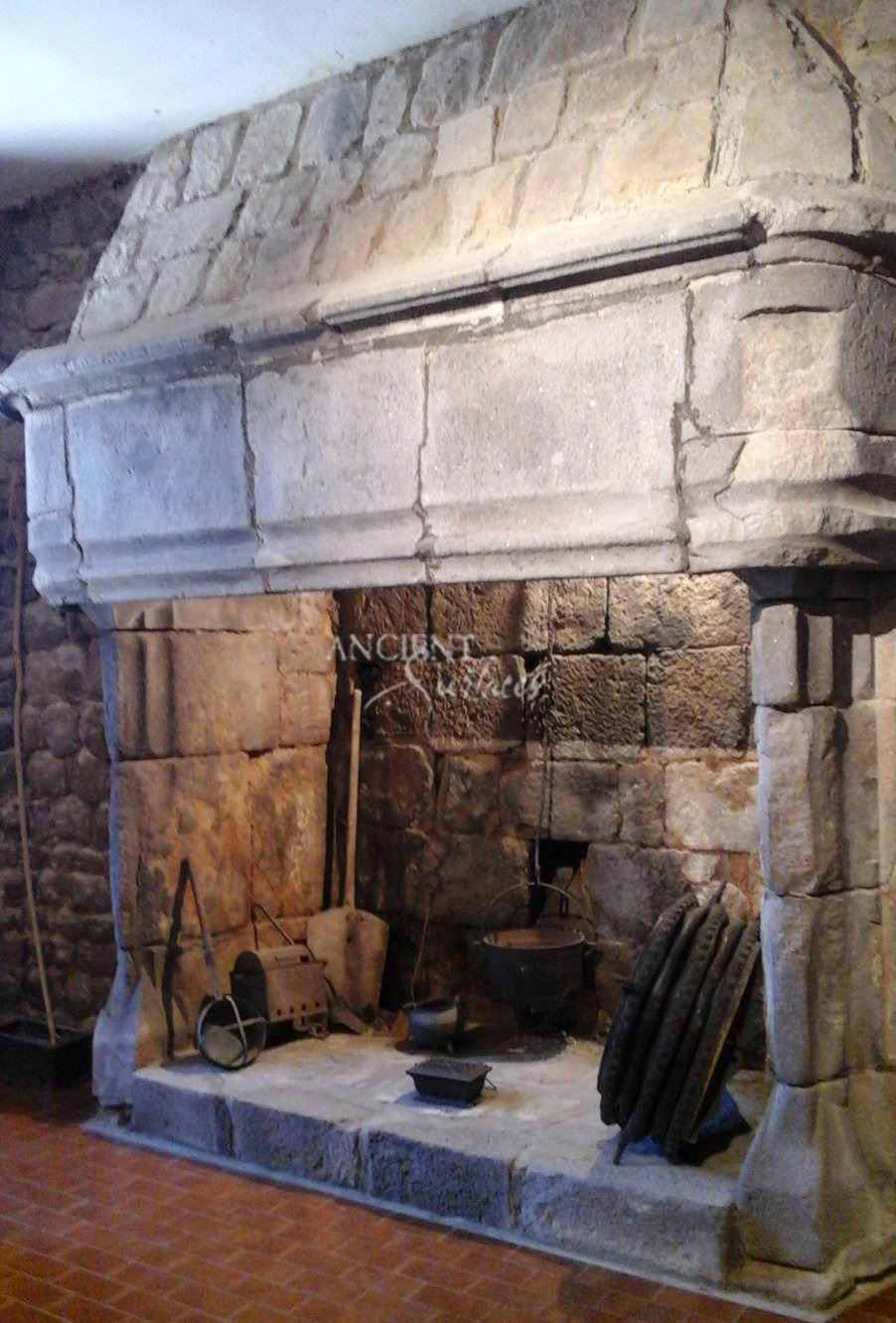 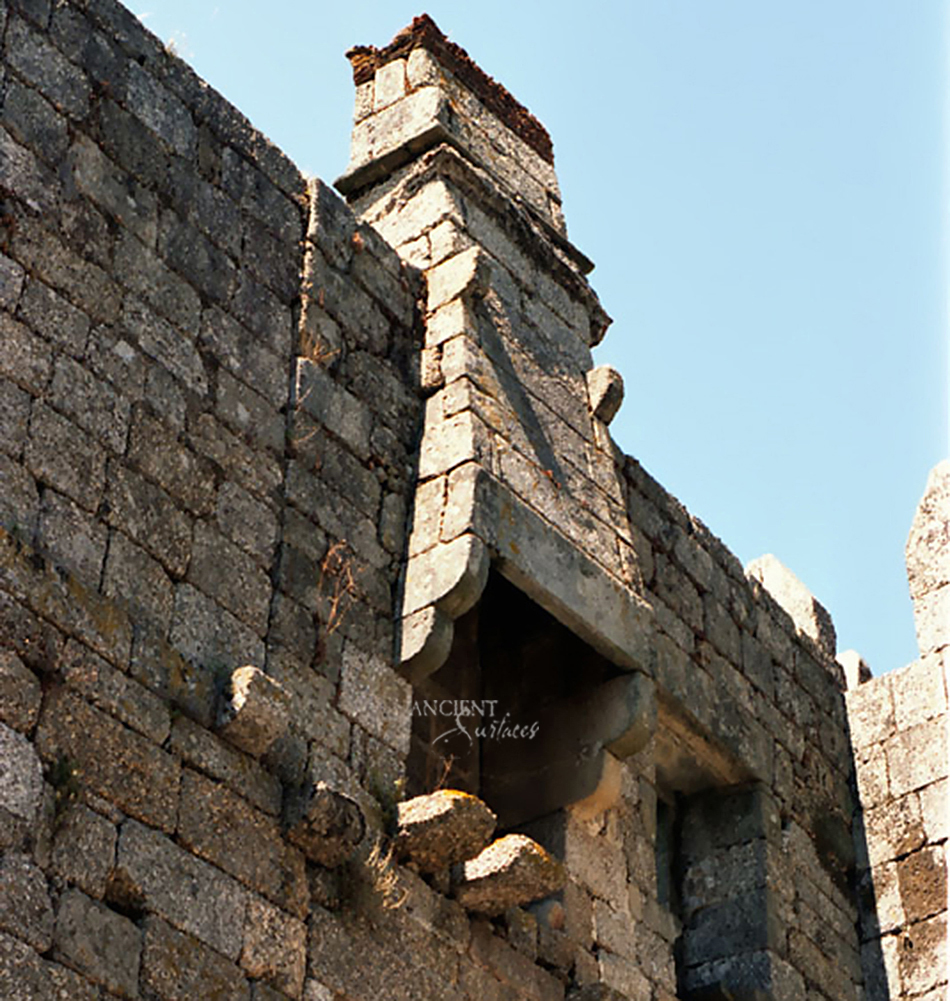 The term “Saracen” or “Sarrasine” spreads in the 16th century, perhaps in connection with the mysterious era of the Crusaders when the French fought a prolonged war against the North African Moors, the Turks, The Arabian kingdoms of Andalusia and Egypt, and Saladin’s hoards. Intrigued by these strange architecture that was culturally mixed, the less educated French Farmer started calling their Fireplaces foreign as if they were the fireplaces of a foreign invader or a ‘Saracen’ hence the term “Saracen fireplaces”.

Another Hypotheses on Saracen chimneys can be likened to traditional Aragonese chimneys from the Upper Aragon region, in the Spanish Pyrenees, that were structurally quite similar to the French farmhouse fireplaces.

The academic jury is still out on the true origins of the Sarrasine fireplaces and for now at least these amazing fireplaces retain their shrouded of mystery.

Here are a few notable Bressian fireplaces worth noting:

In some cases, monumental fireplace featured a “archebanc” (or the bench-chest raised hearth) that once hosted the regional Lords, the elders of the family or distinguished guests. 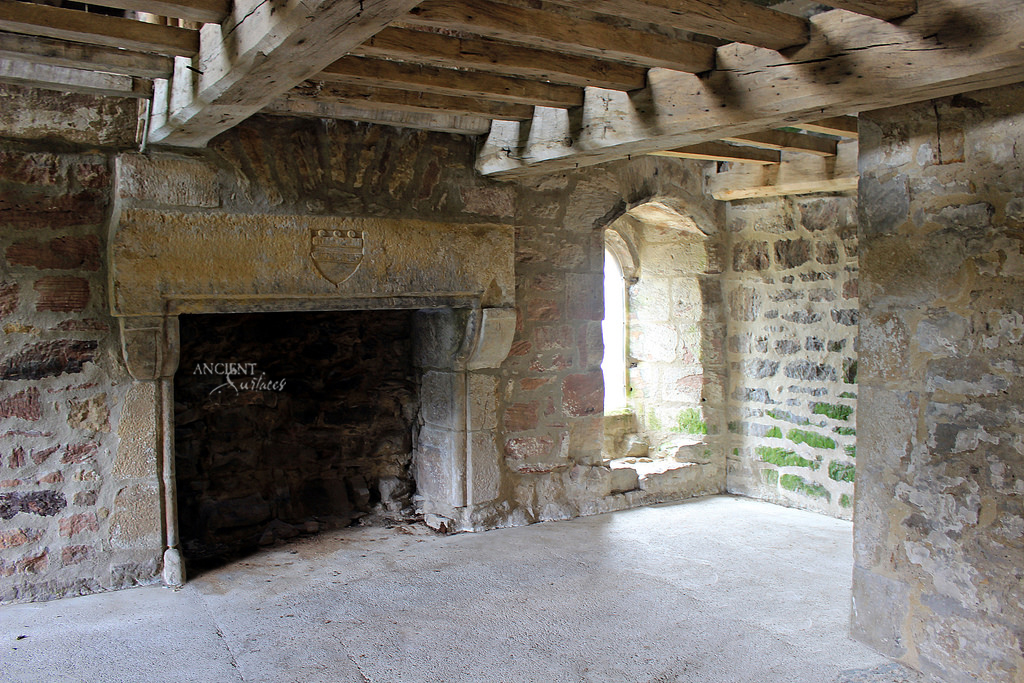 By the eighteenth century, these chimneys were already considered of another age; from there, certainly, the name of “sarrasines” felt even more fitting to those pieces far from any Moorish connection. 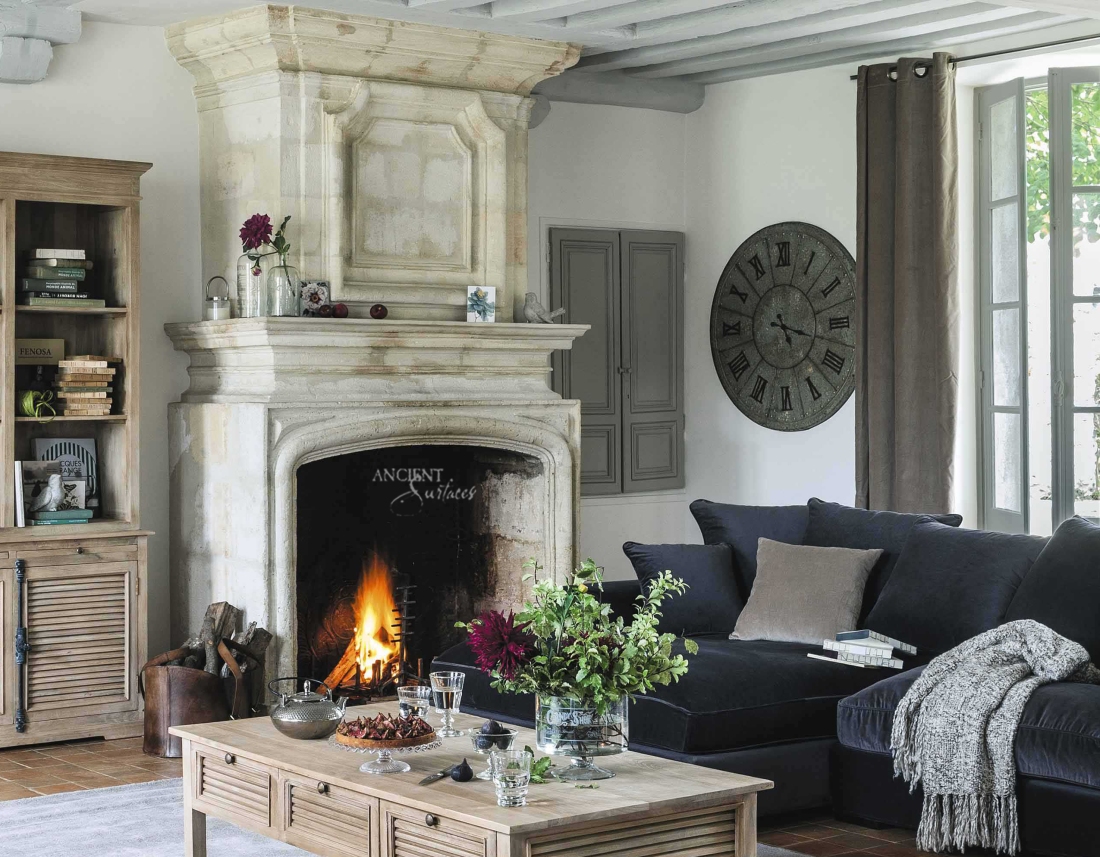 Let’s imagine a living room without a fireplace, well we can’t! Simply because you can’t have much living going on in any room without a real fireplace! Architects and interior designers have made fireplaces a focal cornerstone in any new home or renovation project that seeks to have an individual persona attributed to it.

They have realized more that ever the need to incorporating all inspiring fireplaces into almost every room of the home. No one design element can tell the story of a room more than a well planned fireplace especially if that fireplace was hand carved in real limestone hundreds of years ago! 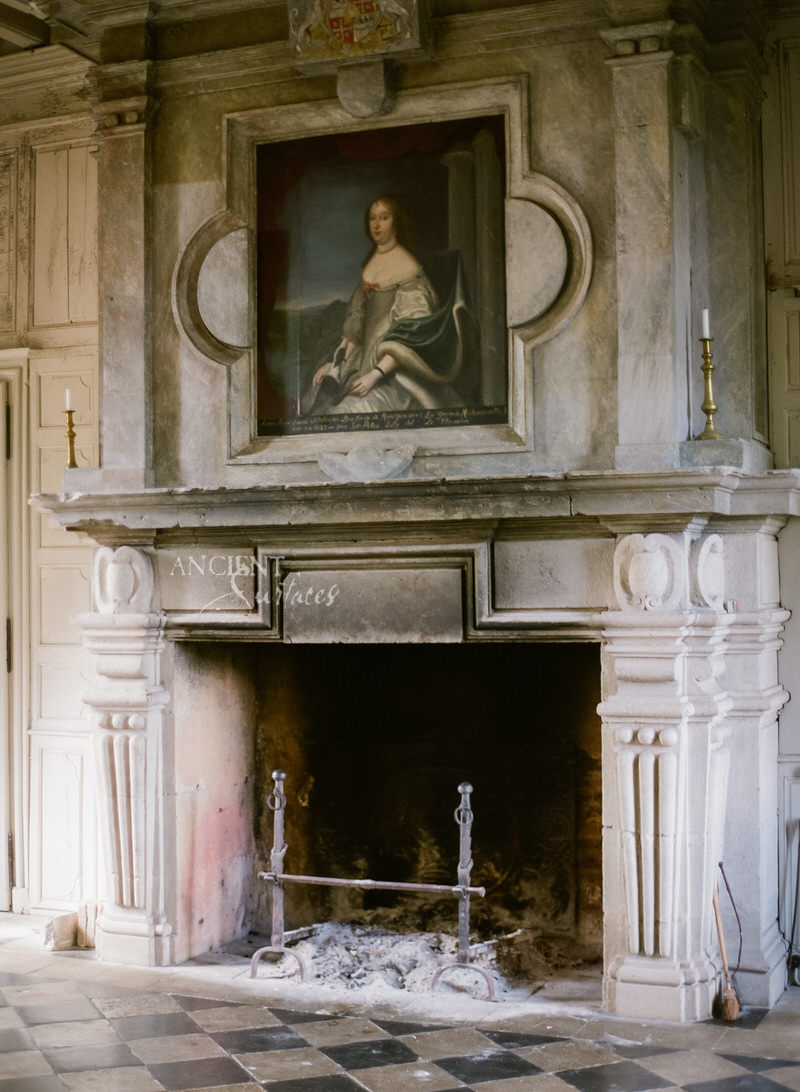 I like in this blog to go all out and showcase some of my favorite antique stone Fireplaces that have both inspired and awed me.
Those impressive antique and reclaimed limestone fireplaces are found everywhere in the home and are shown bellow in no particular order. 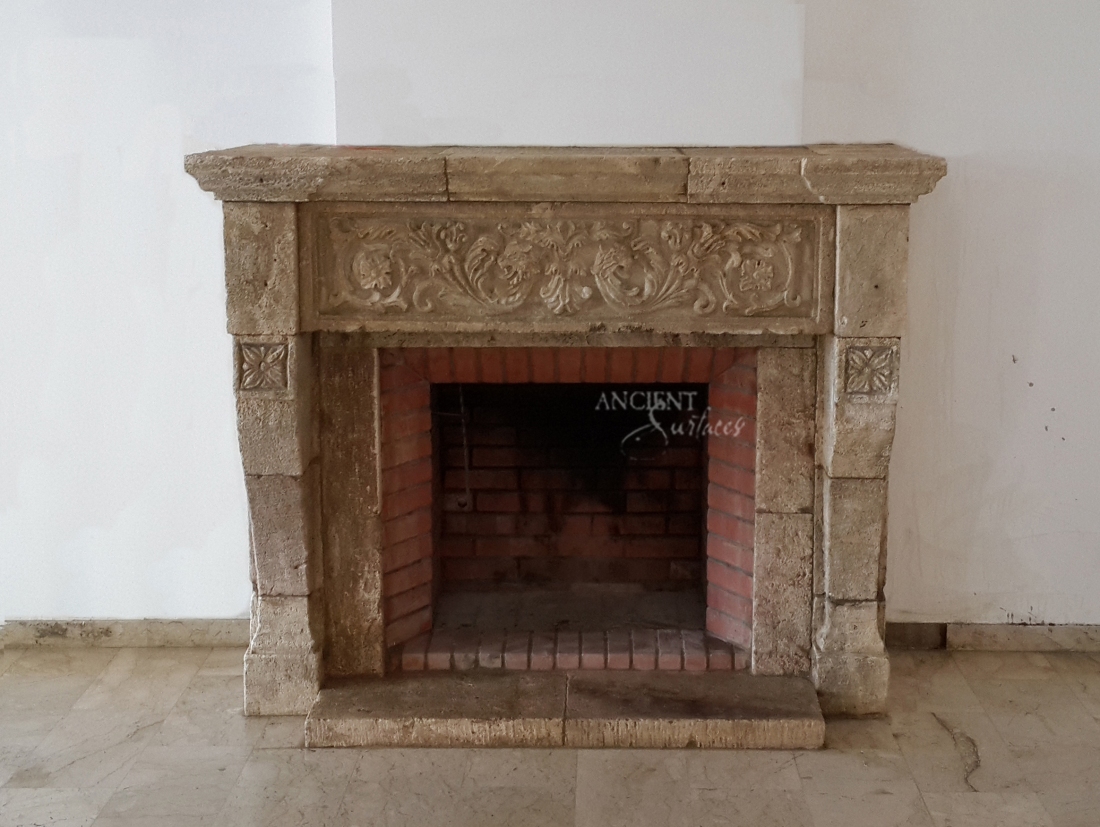 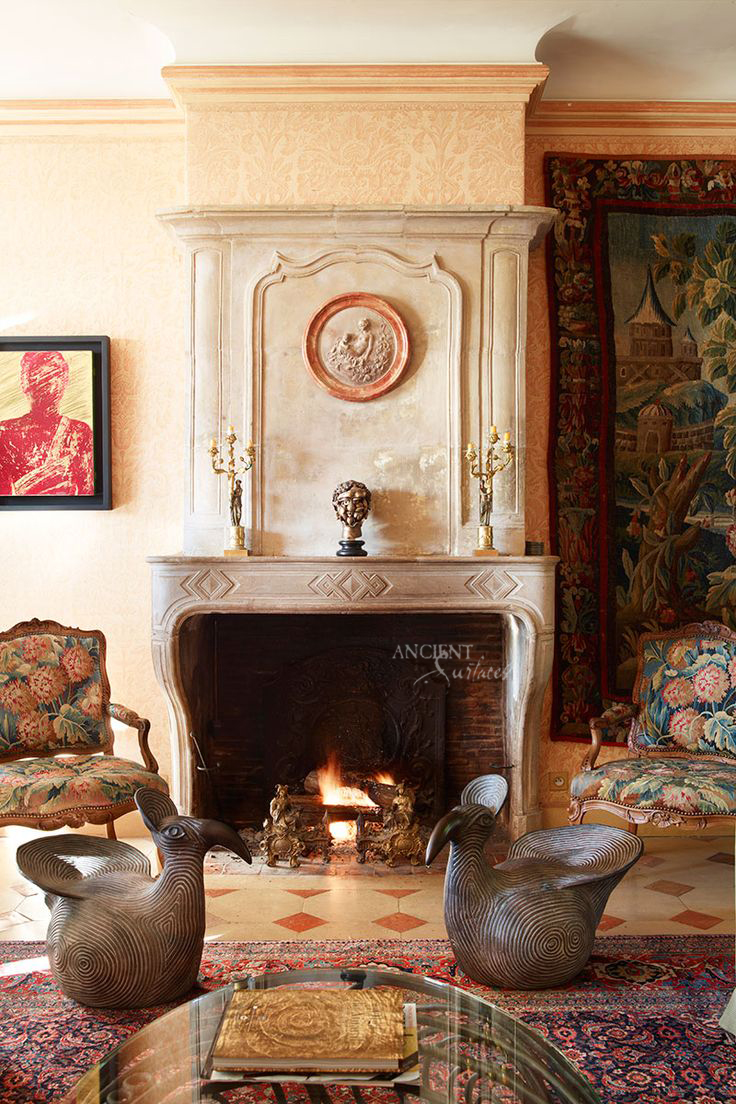 Living rooms are the natural habitats of grand and impressive fireplace. By impressive I don’t necessarily mean fully carved carved out looking like it came from the workshop of a 15th century Italian Renaissance carver. I personally love this use reclaimed 16th century fireplace as the focal point for this laid back French farmhouse inspired living room like the ones you seen on travel blogs or the pages of top interior design magazines… 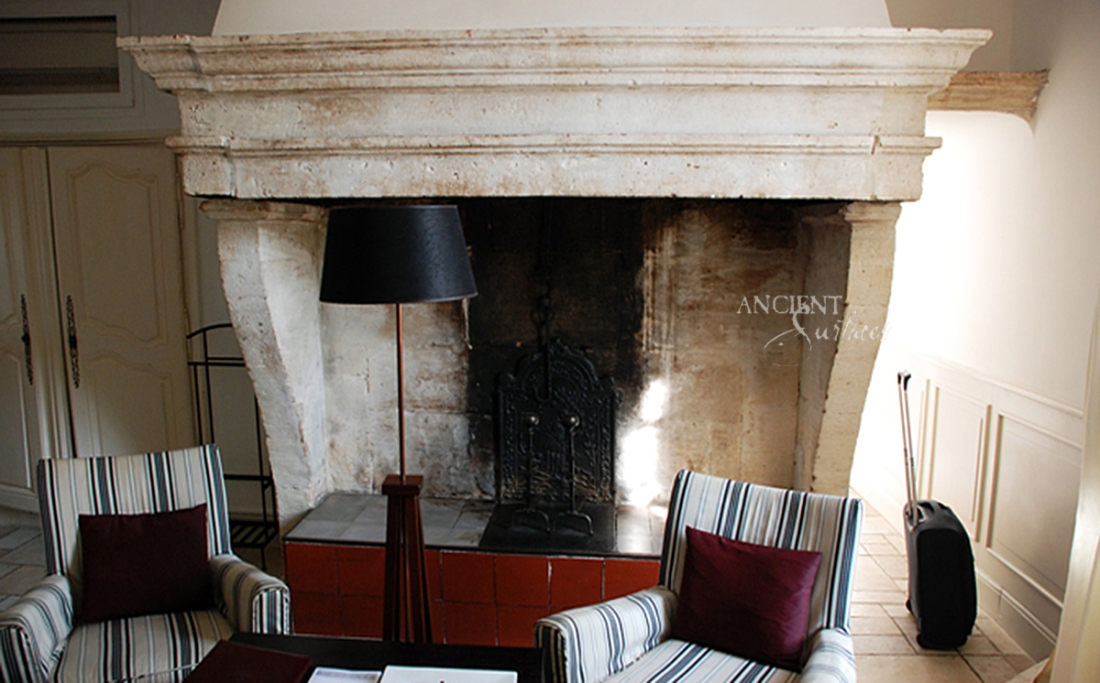 For centuries an open roaring hearth was the heart of every kitchen. Modern appliances gradually replaced cooking fires and kitchen fireplaces fell out of favor- but the look is back!

Prior to the 19th century, fireplace mantles were frequently positioned at the height of a man’s shoulder. A large hearth allowed for a very large fire, vital as the sole source of a home’s heat. This designer took that large hearth and divided it into 2 parts, setting the hearth at eye level with kitchen diners.

We love to find pieces that tell the tale of their role in the daily lives of people past. This fireplace set into a French country dining room bears the marks of centuries of fires burning within its hearth. By leaving the fire marks intact, the designer created a more relaxed dining room

Imagine relaxing in the tub with a fire crackling just a few feet away. Powder room fireplaces add a luxurious element to bathrooms. Prior to modern plumbing, water was boiled over the kitchen fire and carried to a portable bathtub, often positioned near the fireplace within a noble’s private chambers. This delicate fireplace is the ultimate in luxury. 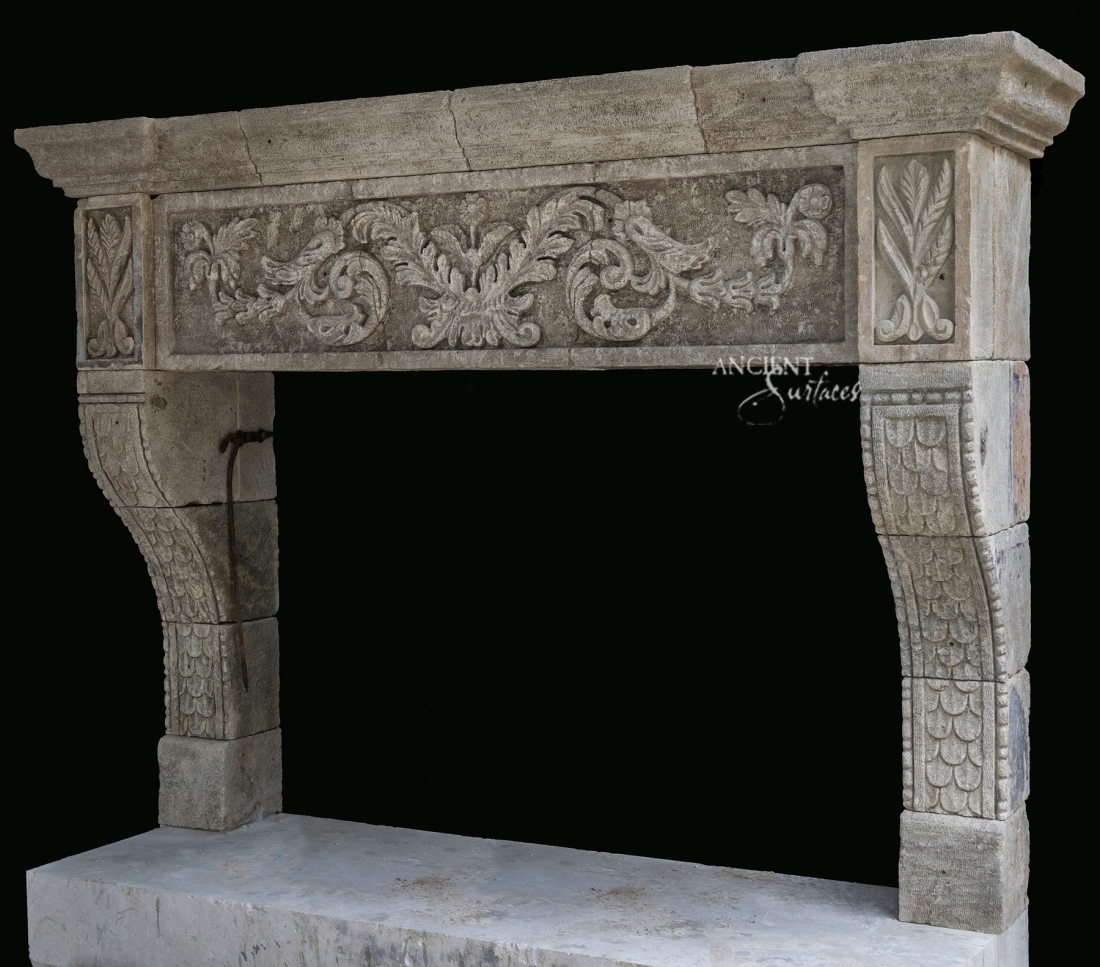 Small spaces, such as powder rooms, call for Fireplaces of diminutive scale. This 18th c. Cheminée from a Village House outside of Lyon, France has a width of just 45”, less than half the size of many we see. It’s graceful lines would translate beautifully to a French country spa retreat in your home.

Inspired to add a fireplace to an unexpected room in your home? Contact us to learn how you can acquire a centuries old limestone firepaces from our collection, or click here to browse even more amazing pieces.